This guide is intended to direct externs to relevant sources for completing research assignments.

The main source of laws governing appeals is the court rules.

Annotated versions of both the Federal Rules of Appellate Procedure and Local Appellate Rules are published in the USCS and USCA (in the latter, they are included in title 28 of the Code).

Every practitioner should be aware of the below treatises, which are extensive and often cited by the courts. These volumes are critical to much of the substantive law (even though procedural) discussed on appeal. Each treatise is arranged more by topic than rule.

Appellate cases were traditionally published in reporters. Citations to these cases were to the volume, the reporter, and the page number. This was followed by a notation of what court made the decision if it wasn't apparent from the citation and the date. Many times the reporter abbreviations contain a series notation. For example, Washington Supreme Court cases were reported in volumes 1-200 of Washington Reports. Instead of numbering the next volume 201, the Reporter of Decisions elected to start a new series so the volume became 1 Washington Reporter, Second Series.

Below is a sample citation with an explanation of each part: 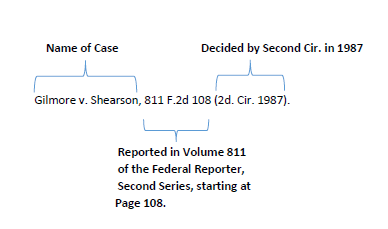 More Bluebook citation information for federal court cases can be found at the Georgetown Bluebook Guide.

Practitioners may need access to court documents and the documents filed in court.

A limited number of briefs may also be available for free on the Internet.

This page is meant to supplement the research guide on Appellate Practice in Washington.