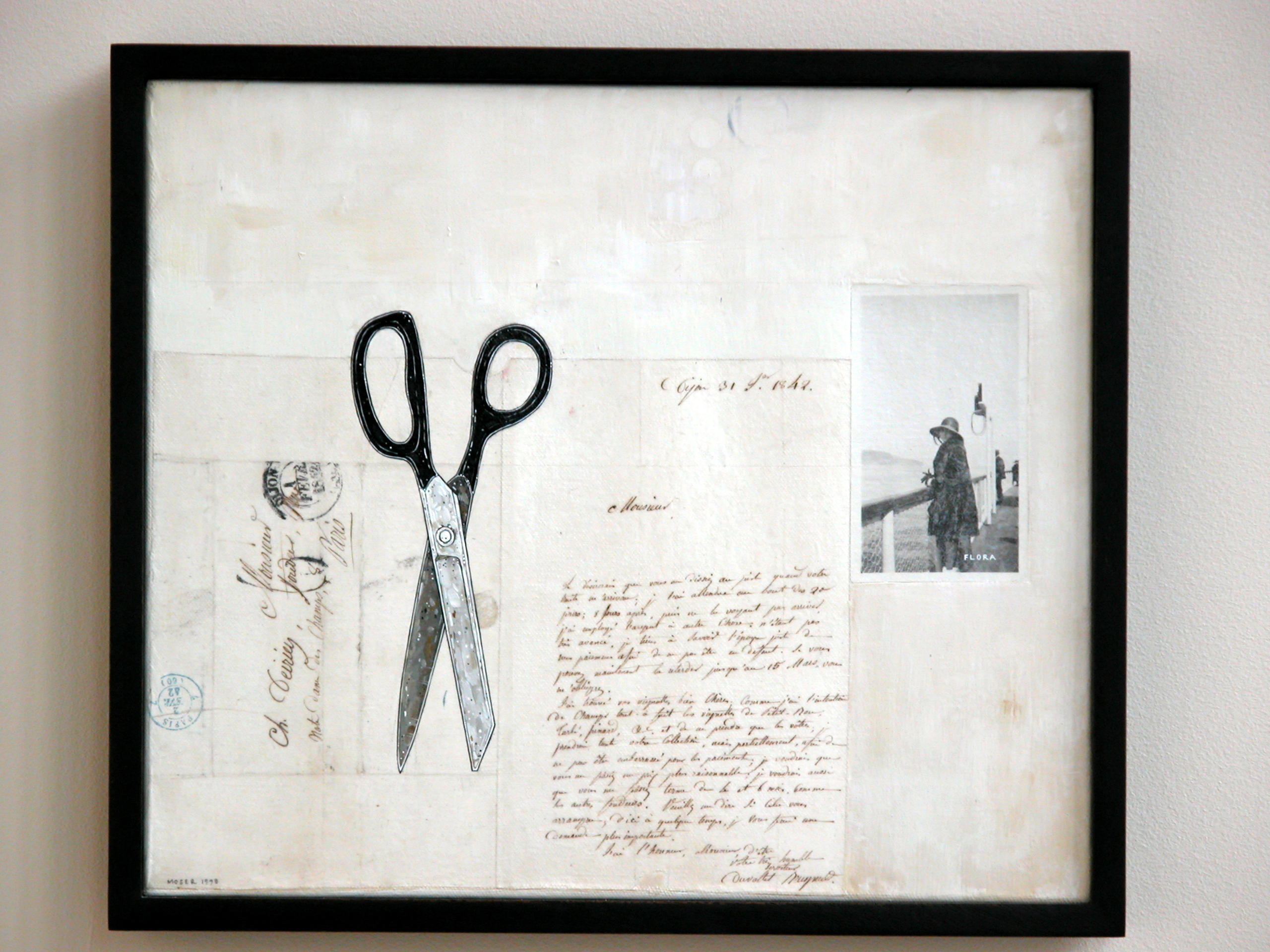 The Great Human Race: The Counselors by John L. Doyle

Donated by Paul and LoRayne Gordon 1986

"The Counselors" is the fourth chapter of an ongoing series entitled THE GREAT HUMAN RACE. Each chapter in the series requires nearly two years of research. That research consists of travel to the country of origin, visits and study at libraries of specialization, museum study and discussions with scholarly informants. Two major sources of information for "The Counselors" were Harvard Law School and the Museum of Anthropology in Mexico City. The actual creation on the stone and printing of the edition takes three months to complete.

The information which Doyle gathers during his research period is documented in the final stone lithographs and briefly explained in the description sheets which accompany each image. The children who visit the Washington County Court House can also participate in the learning experience by reading those descriptions prepared specifically for them by elementary students from Independent School District #834.

"The Counselors" portfolio is a visual interpretation of man and his laws. These laws represent an aspect of culture which employs the sanctions of organized society to regulate individual and group conduct. The resultant legal systems rest on a foundation of social values which reflect the attitude, ethic and behavior of a society. These differing social values result in a widely divergent cultural view of what is just. But, all employ in varying degrees the concepts of truth; knowledge; wisdom; custom; harmony; obligations; equity; authority; judgment; and renewal. This portfolio symbolizes these concepts and gives added meaning to the universality of the human race.

Wearing a diadem (crown) which was a symbol of power, and carrying a fan which symbolized his position of authority, the Aztec magistrate was charged with the responsibility of administering justice for minor cases and disputes.

Characterized as a serpent, Quezalcoatl reigned as god of wisdom. Through his own blood sacrifice, this legendary figure resurrected man from the ashes and fought for control of the earth. The passionate absorption in their spiritual lives was exemplified through imitation of Quezalcoatl's sanquinary sacrifice. By executing these bloody rituals and a maintenance of strict moral conduct, the Aztec people hoped to obtain the favor of the gods and thus guarantee the continuation of their world or sun. 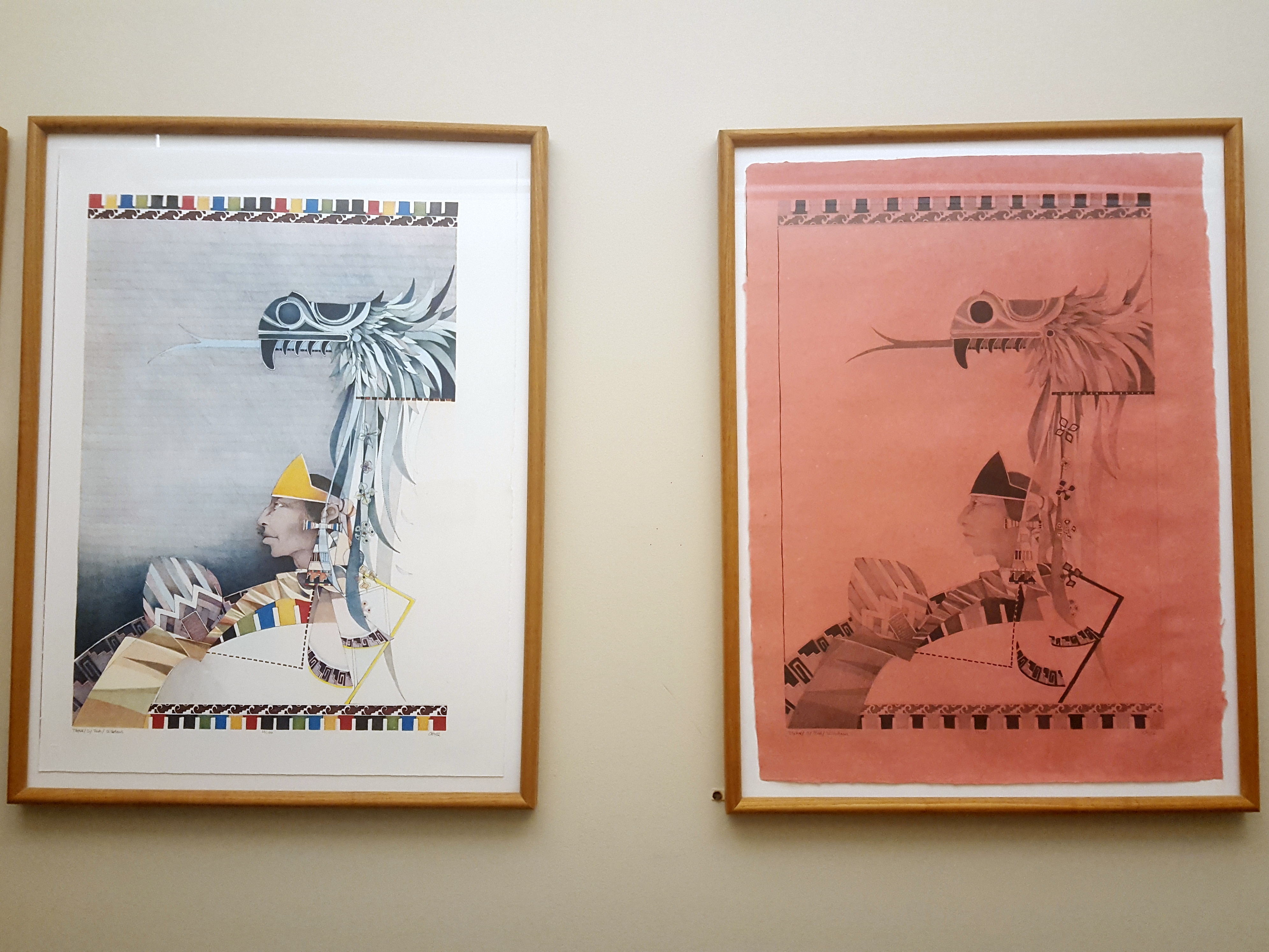 The basic philosophical principles of Chinese law evolved from the idealistic teachings of Confucius, and the legalist doctrines of Li Ssu. The fusion of these philosophies set the standards for a society whose major objective was the maintenance of social harmony.

A symbol of imperial power, wisdom, and benevolence, the dragon tries to swallow the sun which is traditionally visualized as a three legged bird. This symbolizes the magistrate's inability to deal unjustly.

Wearing a silver pheasant, which identifies him as a fourth ranked civil servant, the Manchu figure officiates as a magistrate from the Ching dynasty.

The ghost-like figures at the bottom of the print are an exemplification of the ancestral and family respect inherent in the Chinese culture. 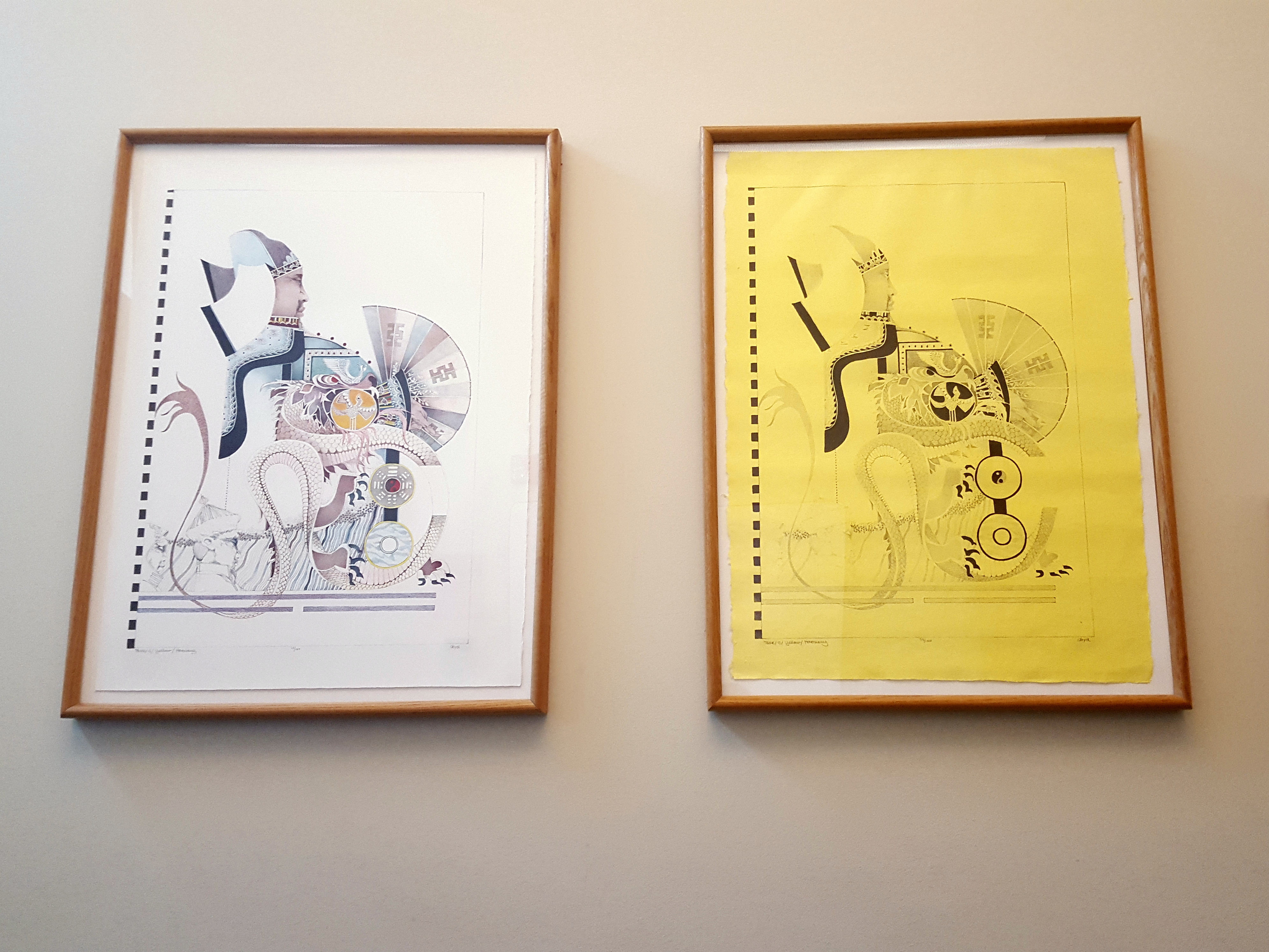 The roots of the Japanese Military Law (Bushido) originated from the system of ethics taught by the great Chinese philosopher, Confucius. The derivatives of that system stressed an ideal and harmonious society in which each individual was born with a rank within the natural order. Inherent in this system were the elements of loyalty, duty, discipline, and foremost, obligation.

The image depicts the samurai, the medieval self sacrificing knight of Japan. The ultimate warrior, he saw in the beauty of the cherry blossom, a reflection of his short but glorious life. The obligations of the samurai lay first with his immediate lord, then to his shogun (military overlord) and ultimately, to his emperor.

Clad in an armor of silk and steel, the samurai is carrying a banner which displays the family crest (Mon) of his shogun. 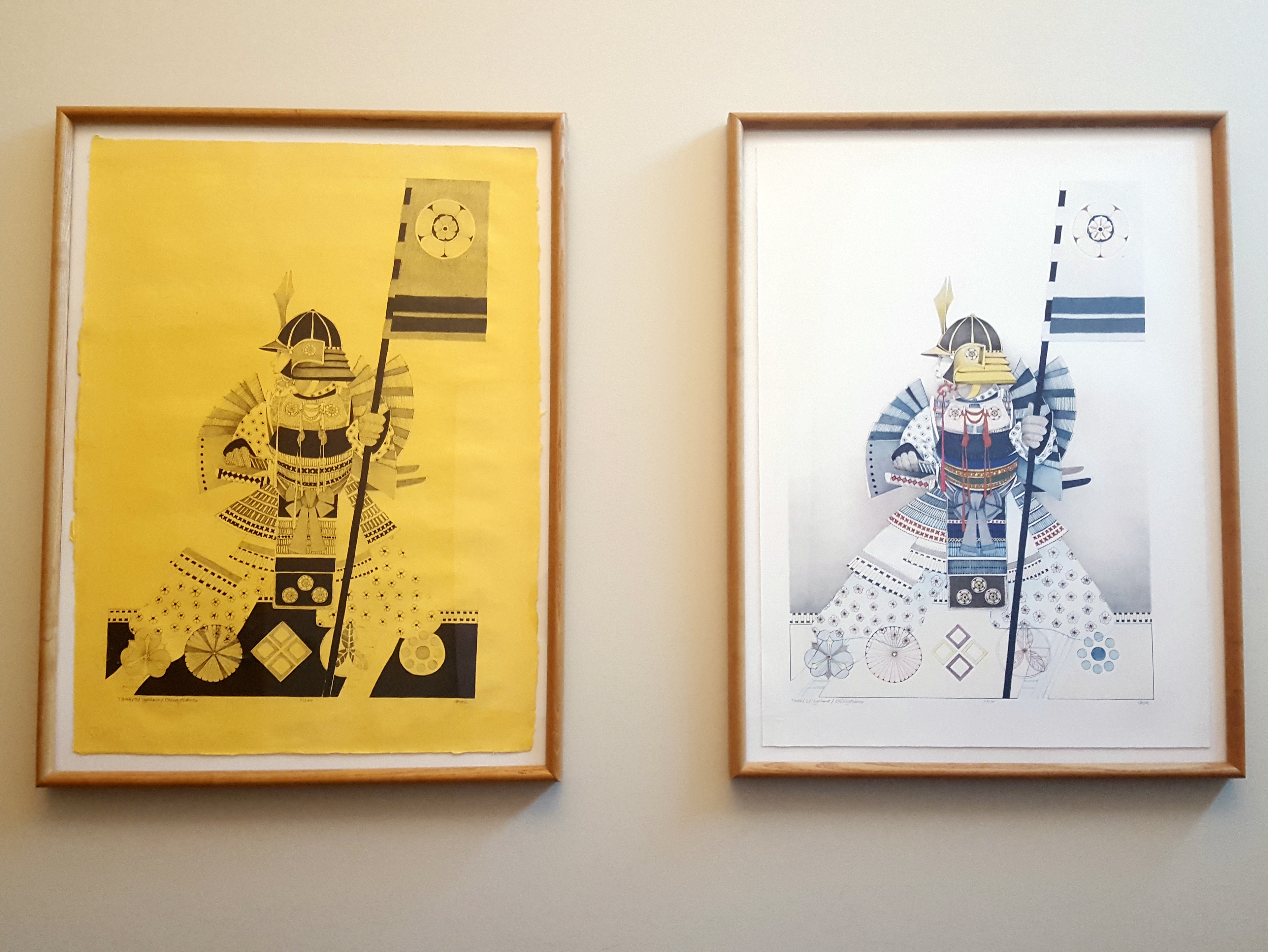 "Custom" symbolizes the role of the judge through the Krontihene of Tomboasi, an African Chief of the Ashanti nation of Ghana. The Ashanti represents a most powerful example of a preliterate (but sophisticated) society which evolved into a constitutional monarchy. Their constitution, a correlation between human and natural laws, developed into customary law, which had its roots in Ashanti religious philosophy.

Unity between ancestors and descendants was symbolized by the state stool, the symbolic identity of the soul of the state. In this image, the African king is resting his feet as master of his stool.

The Ashanti morality was expressed visually through elaborate and colorful patterns woven into Kinte' cloths which were worn by chiefs and village elders. Each pattern bore a distinct name and related to a specific moral tale. The chief, when wearing the patterned kinte' cloth, was the embodiment of that particular tale. He became the living symbol of the moral and ethical values of his culture. 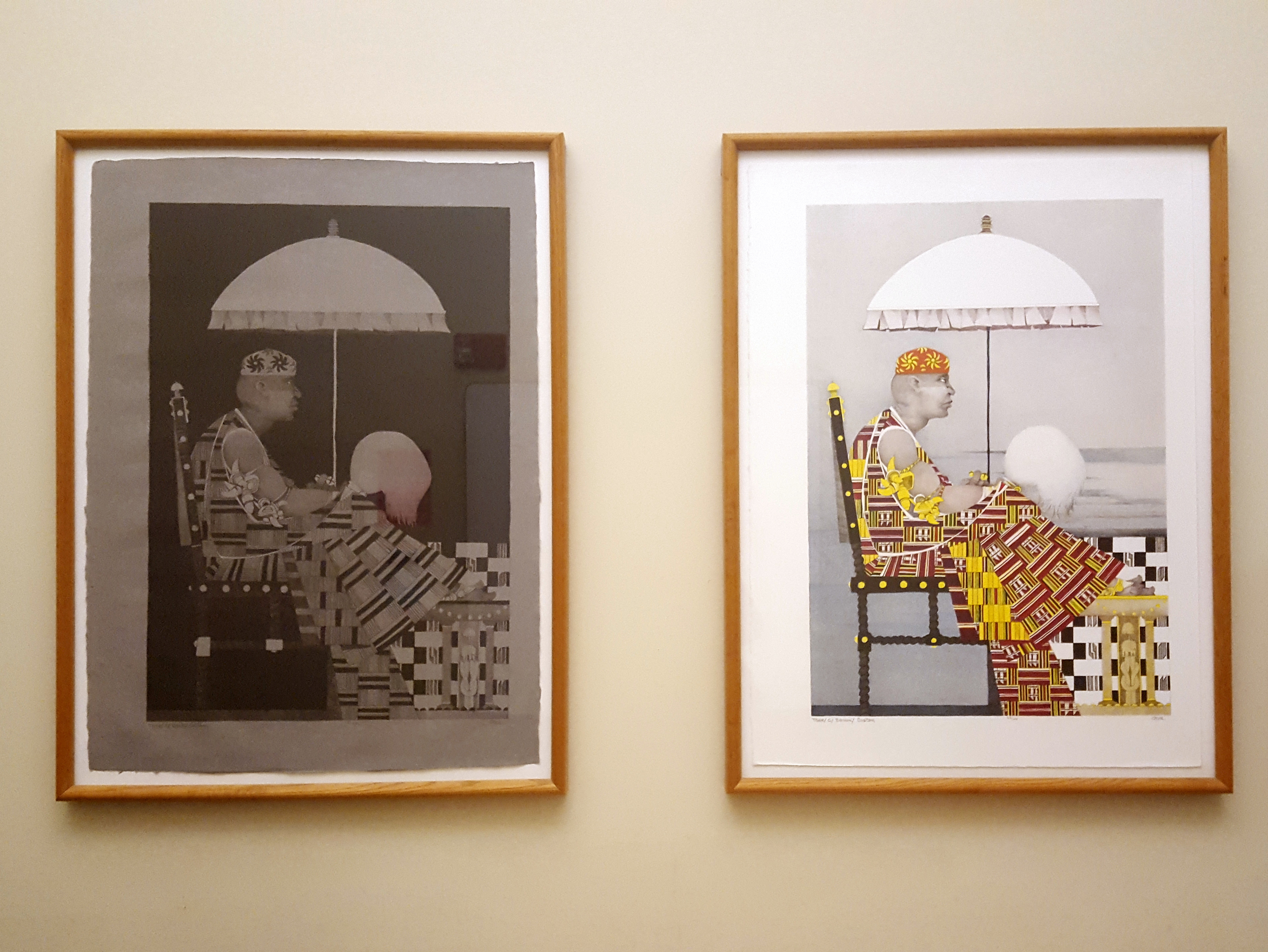 In "Truth", the legendary Egyptian goddess, Maat, is visualized wearing the "feather of truth" which symbolized the delicate balance between truth and falsehood. The personification of the physical and moral law of the universe, Maat most closely defined the term law in ancient Egypt and represented the concepts of truth and justice. These were qualities attributed to the divine pharaoh whose edicts and proclamations in themselves became Egyptian law.

The ibis-headed god, Thoth, was Maat's legendary male counterpart. He took part in teh creation of hte earth by materializing the sun's thoughts into earthly objects. The Egyptians thought the heart to be the seat of all human activity. Thoth became known as the god of judgment when he weighed the heart agains the feather of truth for the final judgment for man's resurrection with the sun god. This became the first depiction of scales in symbolizing justice.

Behind Maat is the eye of Re (the sun). This was representative of the myth which told of the eye's removal from the statue of Re, and the resultant disturbances which then occurred in the natural universe. Legend concluded that disruption would cease if the eye was replaced. 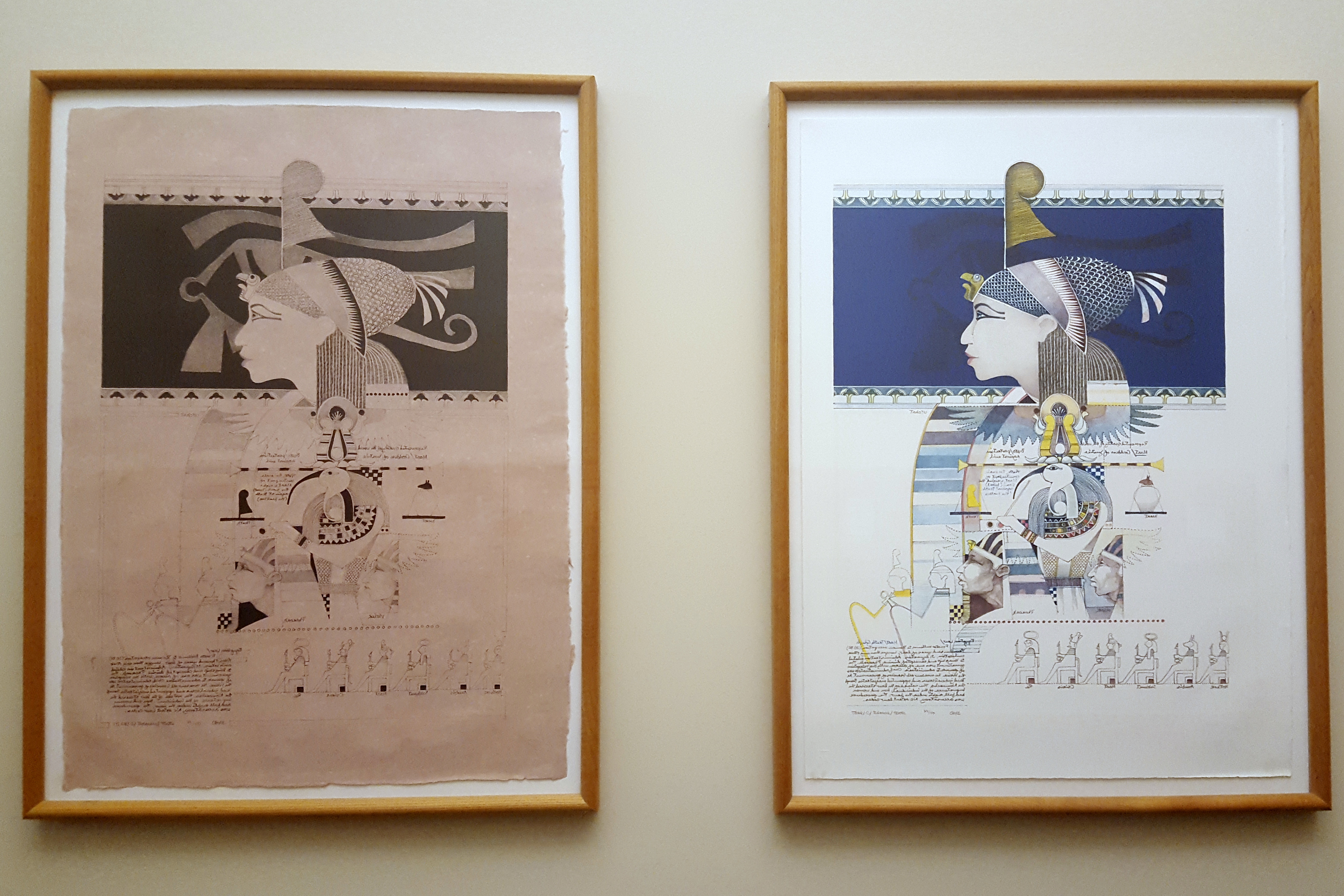 Portrait of St. Thomas More by Hans Holbein the Younger

Portrait of St. Thomas More
Hans Holbein the Younger (1497-1543)
The original is in the Frick Collection 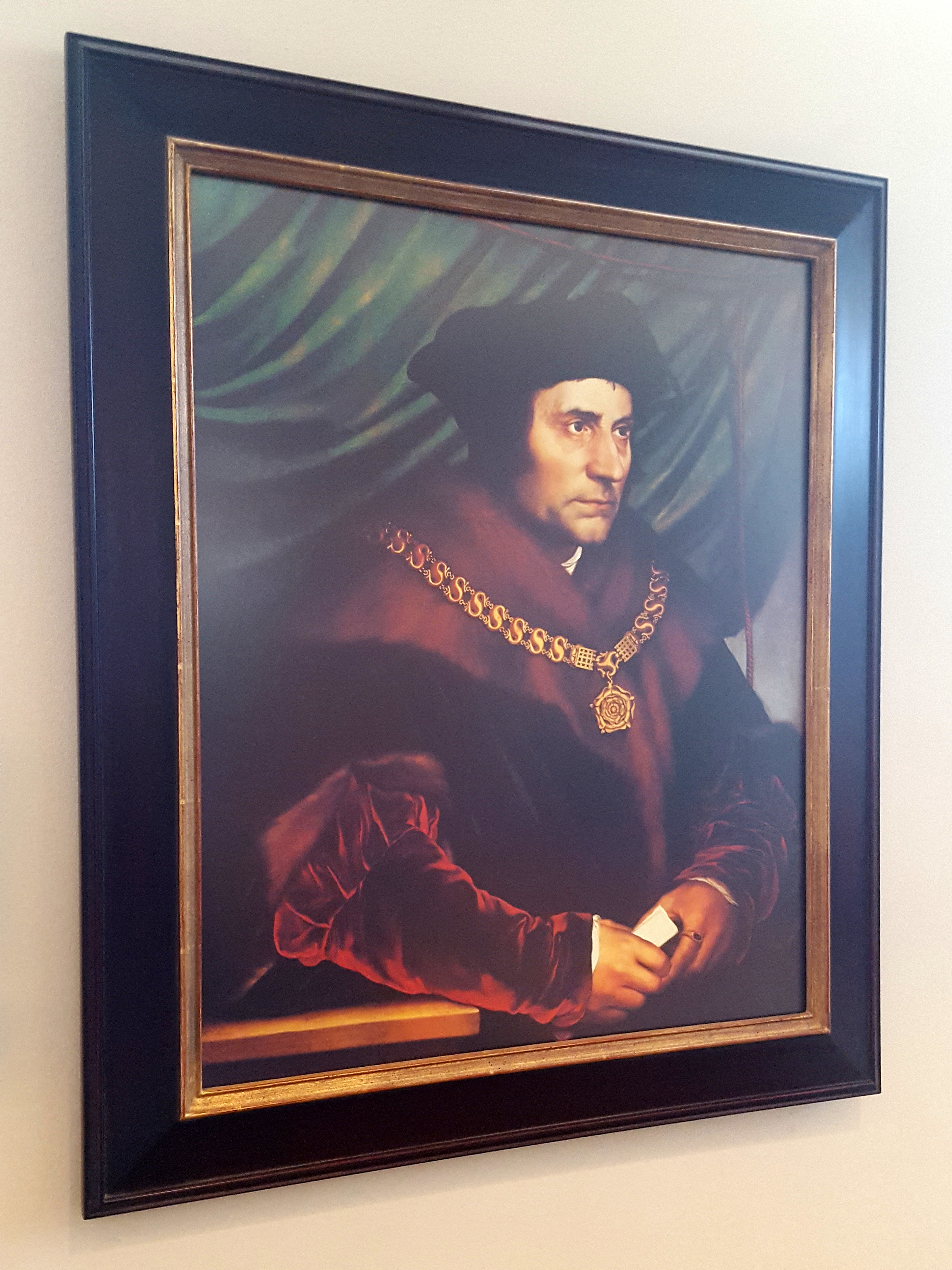 This portrait of St. Thomas More, the patron saint of lawyers and public servants, is presented to the students, faculty and staff of Seattle University School of Law at the 2009 Red Mass in honor and memory of Norm Maleng, beloved and longtime King County Prosecuting Attorney, who set a standard of integrity and excellence which will forever serve as an inspiration to all. Norm's wise counsel is sorely missed as we recall these especially apt lines from Shakespeare's Merchant of Venice, "And earthly power doth then show like God's when mercy seasons justice."

Order and Judgement by Susan Singleton 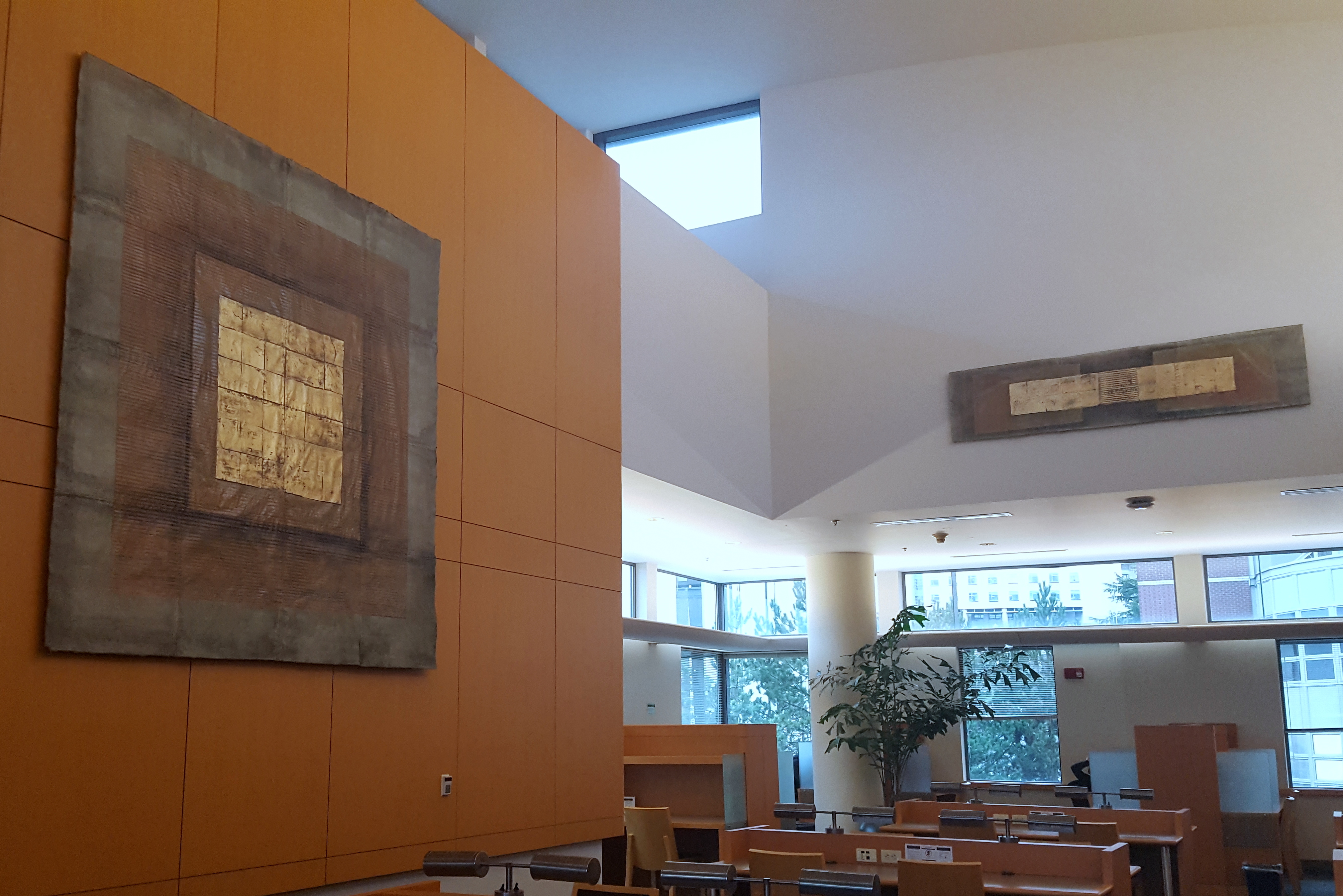 Susan Singleton's work has been exhibited at the Smithsonian Institute, Washington D.C., the Washington State Capitol Museum, the Seattle Art Museum, and the Henry Gallery. Her work references ancient walls and objects from ancestral cultures. Asian hand-made papers are stitched into a grid which lays a foundation for the repeated patterns of precious metal leafing on the surface. Uniquely cross cultural and richly textural, Singleton's work springs from a search for balance and spirit. 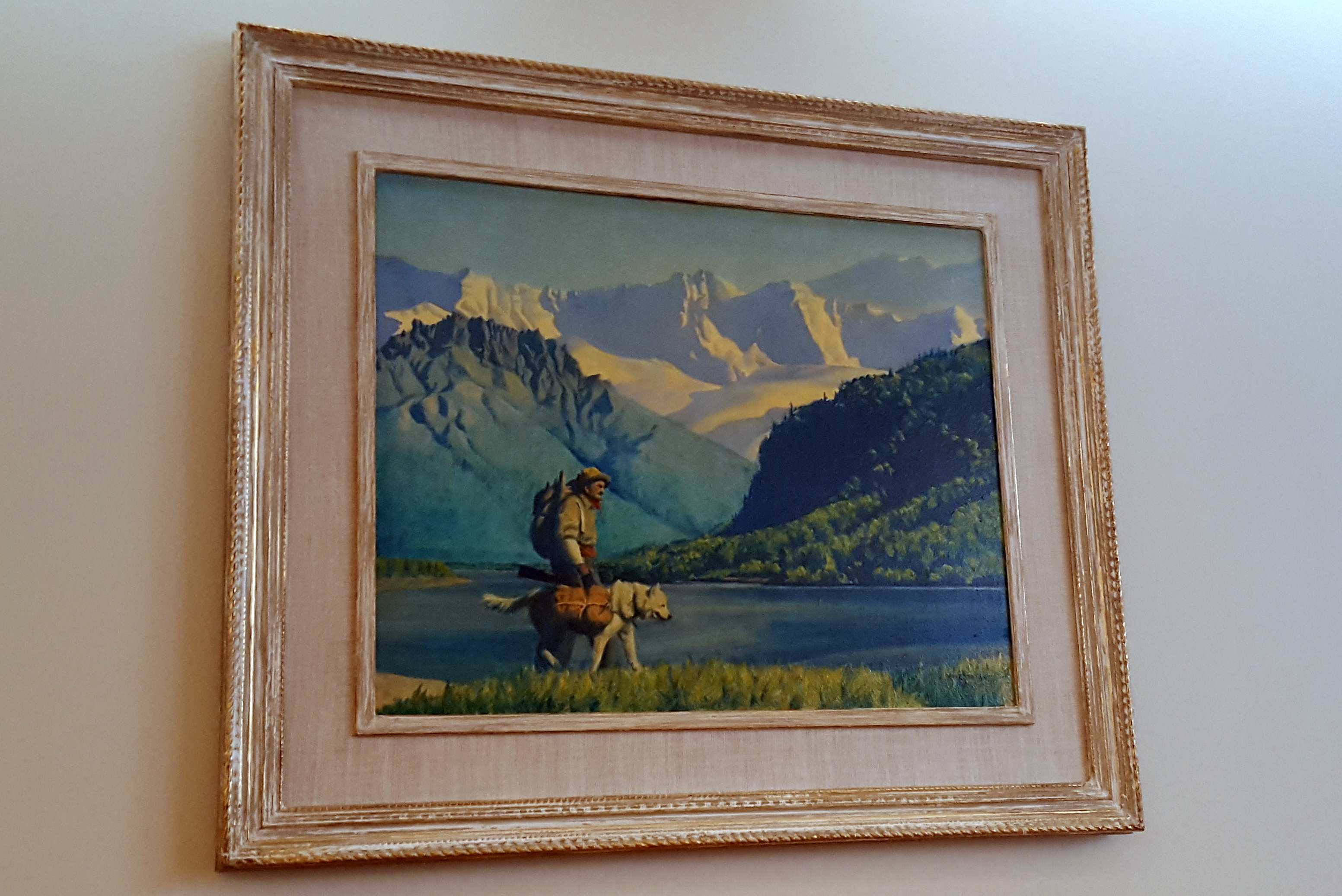 Fred Machetanz is an Alaskan artist whose training includes the Art Institute of Chicago and the American Academy of Art, as well as a Master's Degree from Ohio State University. His work has been exhibited at the Detroit Art Museum and the Tryon Gallery Ltd. in London and is held in the permanent collections of the University of Alaska Museum, the Anchorage Historical and Fine Arts Museum, and the Frye Museum in Seattle. He was designated American Artist of the Year by American Artist Magazine in 1981. "The painting depicts an old timer, or sourdough, hiking over Alaska terrain in the summertime, looking for gold prospects. He has with him his pack dog, loaded with supplies. In the background is the Knik River, with Chugach Mountains in the middle distance and the snow capped peaks of the Wrangell Mountain Range." --Fred Machetanz 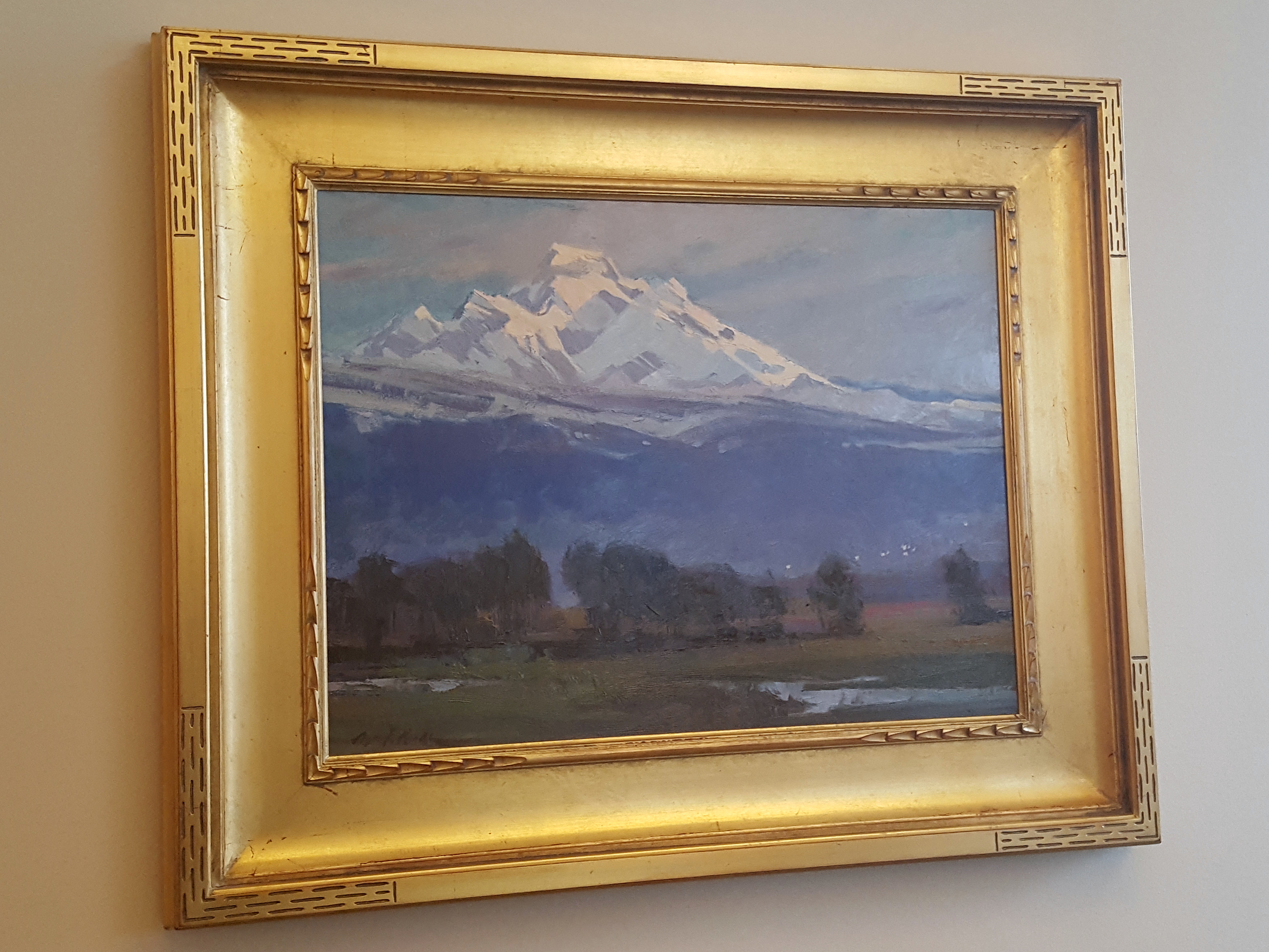 William F. Reese traveled around much of the Pacific Northwest and Northern California before opening a gallery and making his home in Wenatchee. Working mostly in oil paint, Reese was a versatile artist who experimented with many different types of media, and exhibited his works throughout the United States and abroad. He was the recipient of many national and regional awards. He passed away in 2010.

The Trial of Bobby Seale

A gift from The Honorable Robert H. Russell, II '75 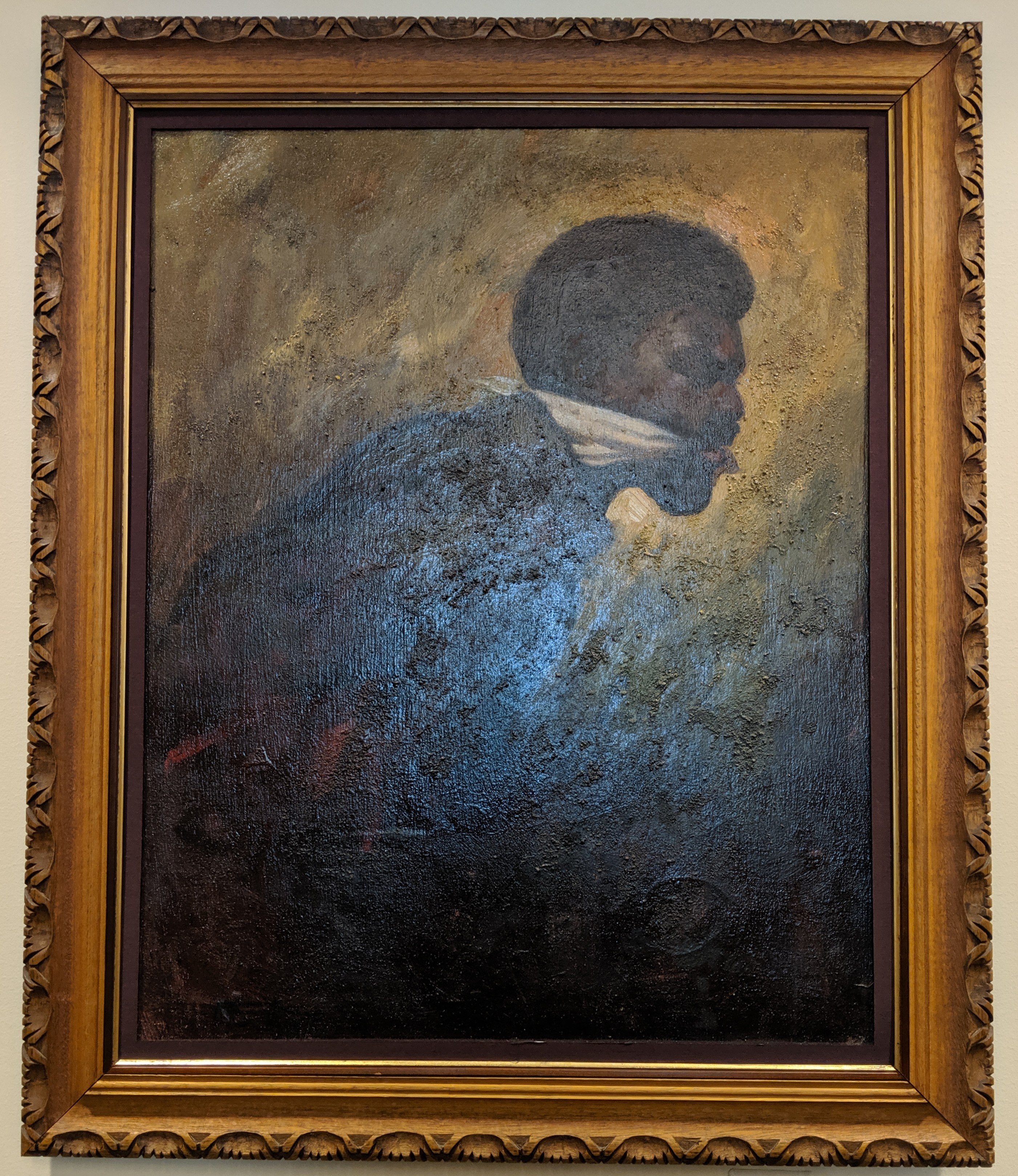 This painting depicts the trial of Robert George "Bobby" Seale, co-founder of the Black Panther Party.  Following the 1968 Democratic National Convention in Chicago, Mr. Seale was arrested and tried for conspiracy to incite rioting.  He and his seven co-defendants at the federal trial became known as the "Chicago Eight."  During that trial, Mr. Seale requested a continuance because his attorney was hospitalized and unable ot represent him.  In response to Judge Julius Hoffman's denials for continuance and for Mr. Seale to represent himself, Mr. Seale continually hurled loud accusations and insults at the judge and prosecution.  Eventually, Judge Hoffman ordered Mr. Seale to be bound and gagged while in the courtroom.

Robert H. Russell, II '75 was the first African American to graduate from the University of Puget Sound School of Law.  He read about Mr. Seale's trial in 1970. "My first thought was that I would make a better judge than Judge Hoffman.  I knew then what I was called to do."  Since its commission, this painting has hung in his family room, over his desk while he studied law, and in his judicial chambers in Colorado.  He says it reminded him of his daily responsibility to the judiciary and to those who appear before him. 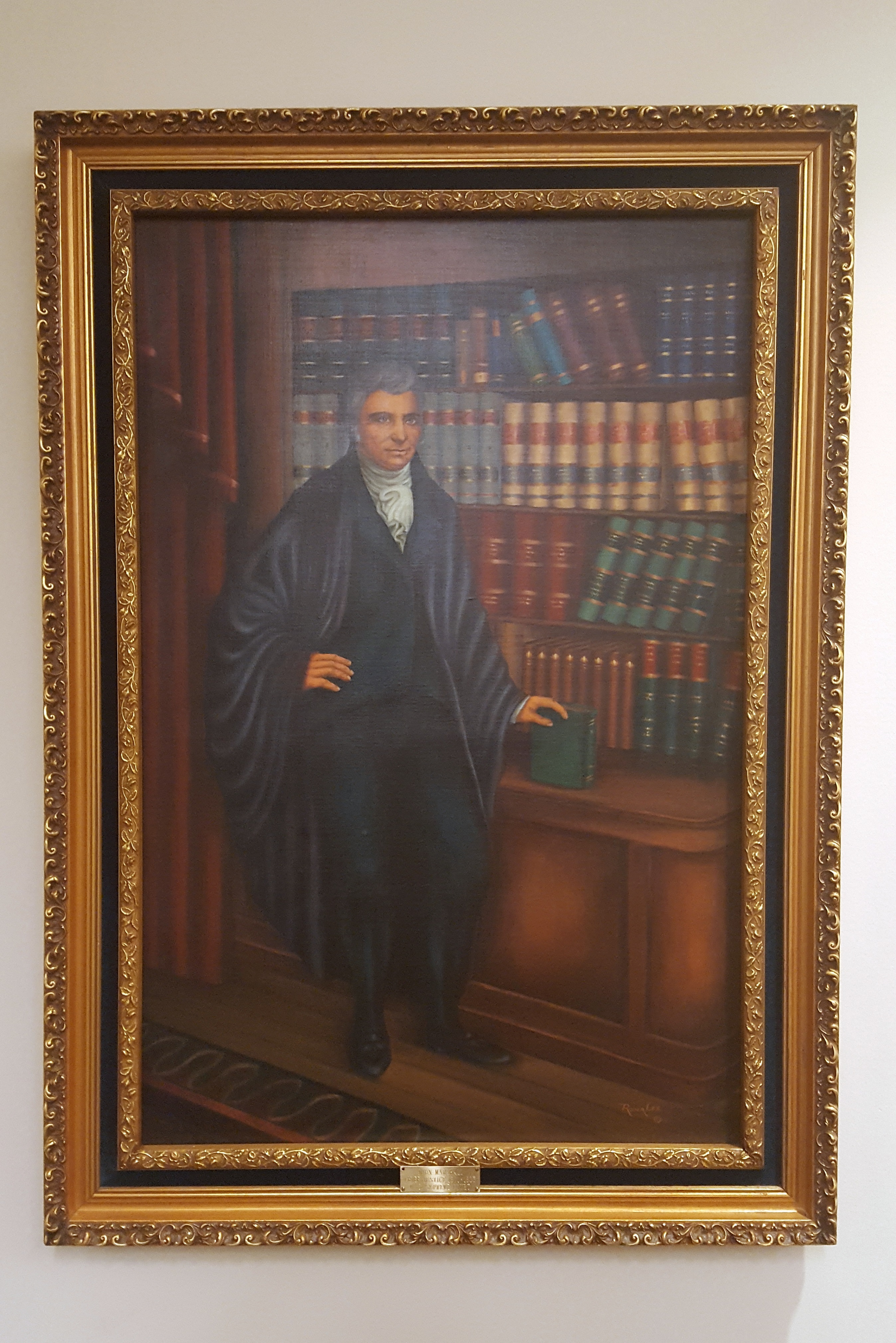 Rona Lee has provided the library with a modern portrait of John Marshall (1801-1853), the 4th Chief Justice of the Supreme Court. Marshall is credited with helping lay the basis for American constitutional law as well as raising the status of the judicial branch to an equal position with the legislative and executive branches of the US government. He held the position for over thirty years at a time when the United States was continuing to grow as a democracy after the Revolutionary War, making him not only the longest serving Chief Justice, but also one of the most important figures in American legal history.