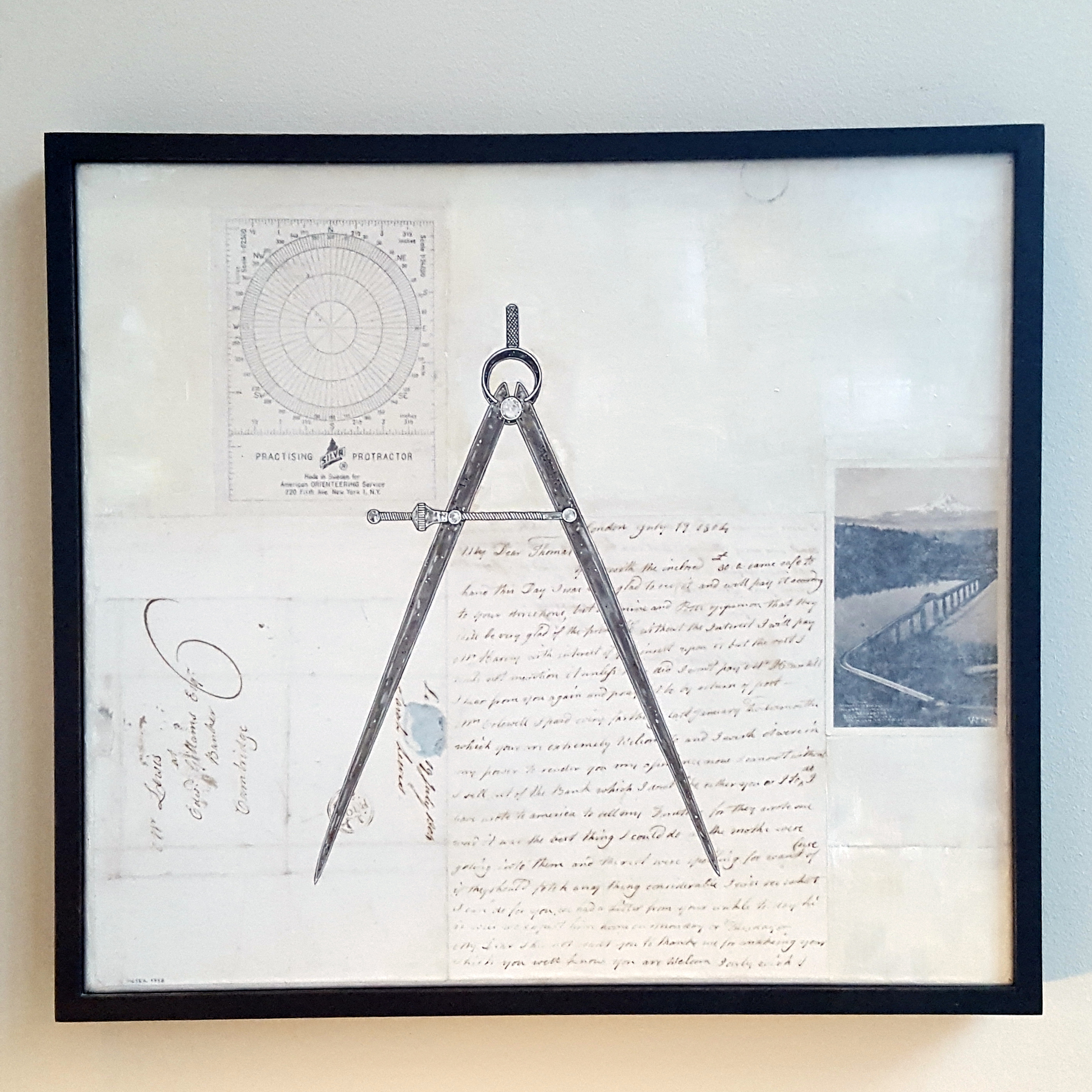 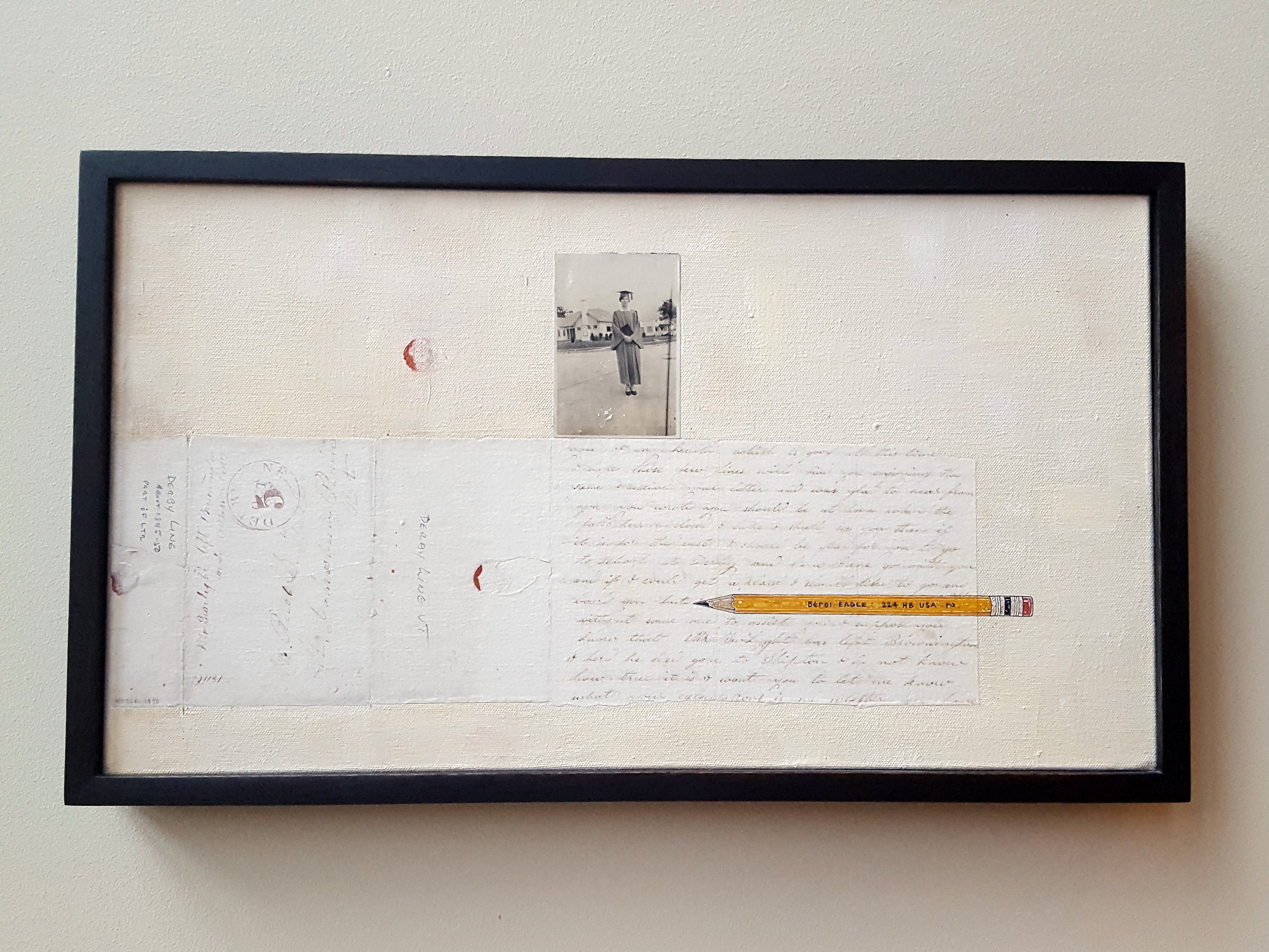 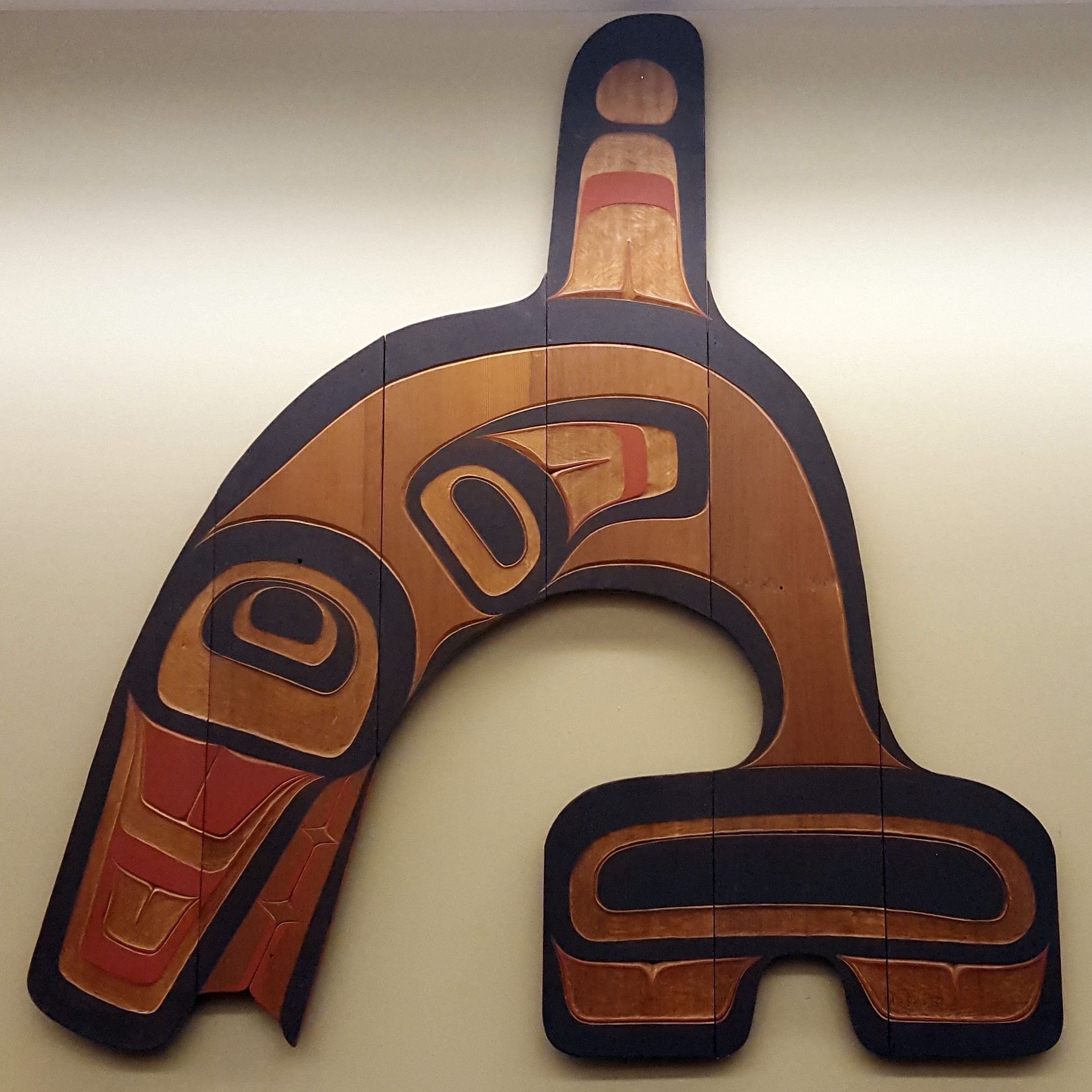 The Great Human Race: The Counselors by John L. Doyle

Donated by Paul and LoRayne Gordon 1986

"The Counselors" is the fourth chapter of an ongoing series entitled THE GREAT HUMAN RACE. Each chapter in the series requires nearly two years of research. That research consists of travel to the country of origin, visits and study at libraries of specialization, museum study and discussions with scholarly informants. Two major sources of information for "The Counselors" were Harvard Law School and the Museum of Anthropology in Mexico City. The actual creation on the stone and printing of the edition takes three months to complete.

The information which Doyle gathers during his research period is documented in the final stone lithographs and briefly explained in the description sheets which accompany each image. The children who visit the Washington County Court House can also participate in the learning experience by reading those descriptions prepared specifically for them by elementary students from Independent School District #834.

"The Counselors" portfolio is a visual interpretation of man and his laws. These laws represent an aspect of culture which employs the sanctions of organized society to regulate individual and group conduct. The resultant legal systems rest on a foundation of social values which reflect the attitude, ethic and behavior of a society. These differing social values result in a widely divergent cultural view of what is just. But, all employ in varying degrees the concepts of truth; knowledge; wisdom; custom; harmony; obligations; equity; authority; judgment; and renewal. This portfolio symbolizes these concepts and gives added meaning to the universality of the human race.

To the Cheyenne, the greatest iniquity was that of murder. When blood was spilled on the ground, through an intra-tribal killing, the earth became physically polluted causing the spiritual corruption of the tribal unit. The pollution caused an odor which drove the buffalo away. This banishment stripped the tribe of their economic stability.

Taking responsibility as a tribe for the impiety of the murderer, the Cheyenne gathered for four days to participate in the spiritual renewal of the Arrow Ceremony. At that time, they made sacrifices and offerings which reinstated their favor from the mystic beings.

In "Renewal", Sweet Medicine, the elected chief of the Cheyenne Tribe, is shown holding the emerging buffalo orange circle which symbolizes the sun during the summer solstice. (The chosen time for the Arrow Ceremony because life giving forces are then at their fullest).

The four bare arrow shafts represent the Cheyenne sacred arrows which have been stripped before the cleansing renewal of the Arrow Ceremony. The pattern at the bottom of the print was designed to represent arrowheads and feathers needed to combine with the shafts for completeness. 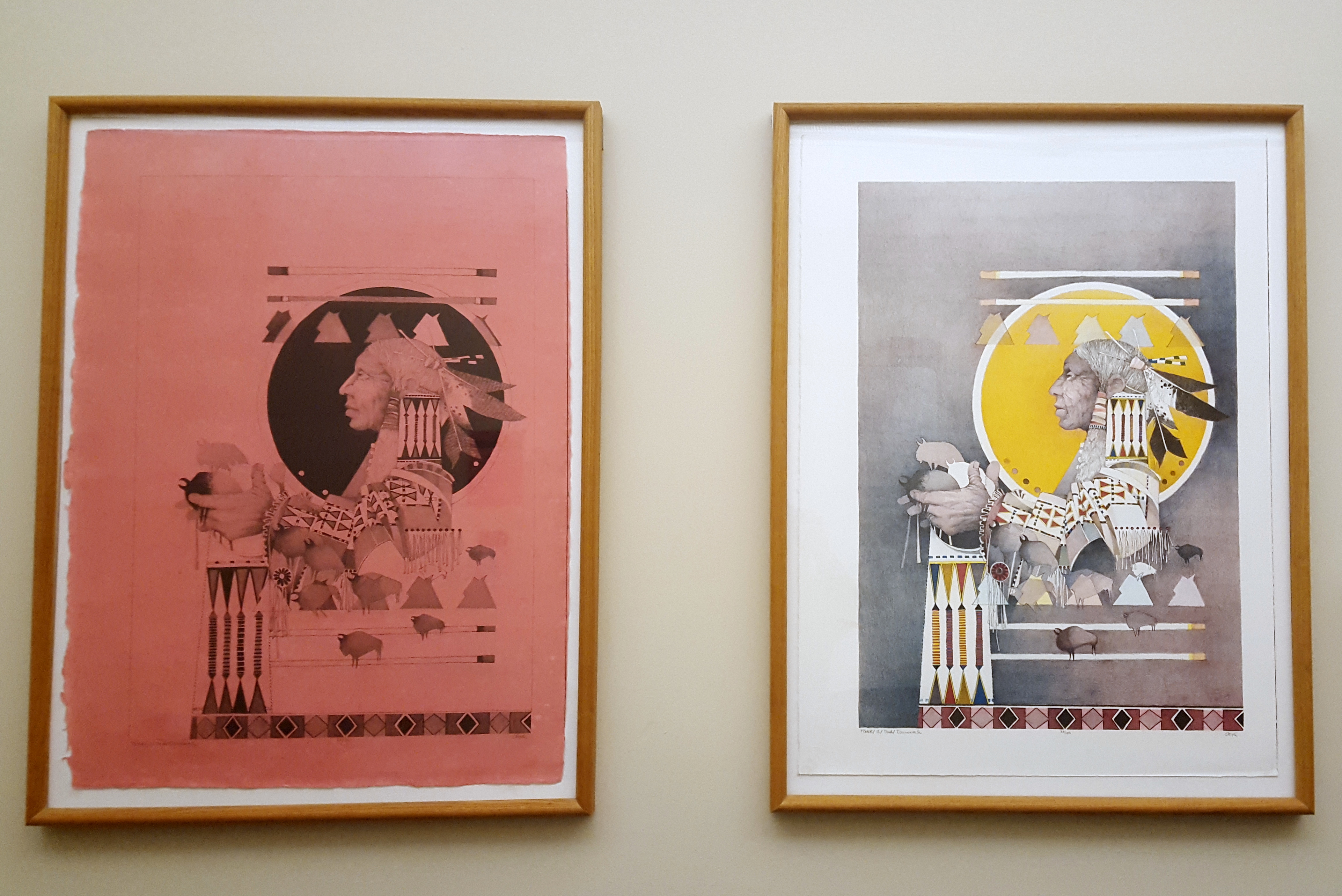 The Torah, represented in "Judgment" as a scroll, was the embodiment of laws which governed man's relations with God and other men in ancient Israel. Making no distinction between the laws of the state and the laws of God, this body of laws contained the first five books fo the Old Testament and all ancient Israeli legislative codes.

In New Testament times, the chief religious, political, and judicial governing body was called the Sanhedrin. The high priest of the Sanhedrin is visualized wearing the hoshem, the breastplate of judgment. On it are twelve jewels which symbolize the twelve tribes of Israel.

Below the hoshem are the Mogen David (Star of David) and the memorah which symbolizes the seven concepts of the God of Israel: Love, justice, peace, harmony, benevolence and light.

The tassels below the prayer shawl serve as an everlasting reminder of the Ten Commandments and the eternal judgment of the Almighty. 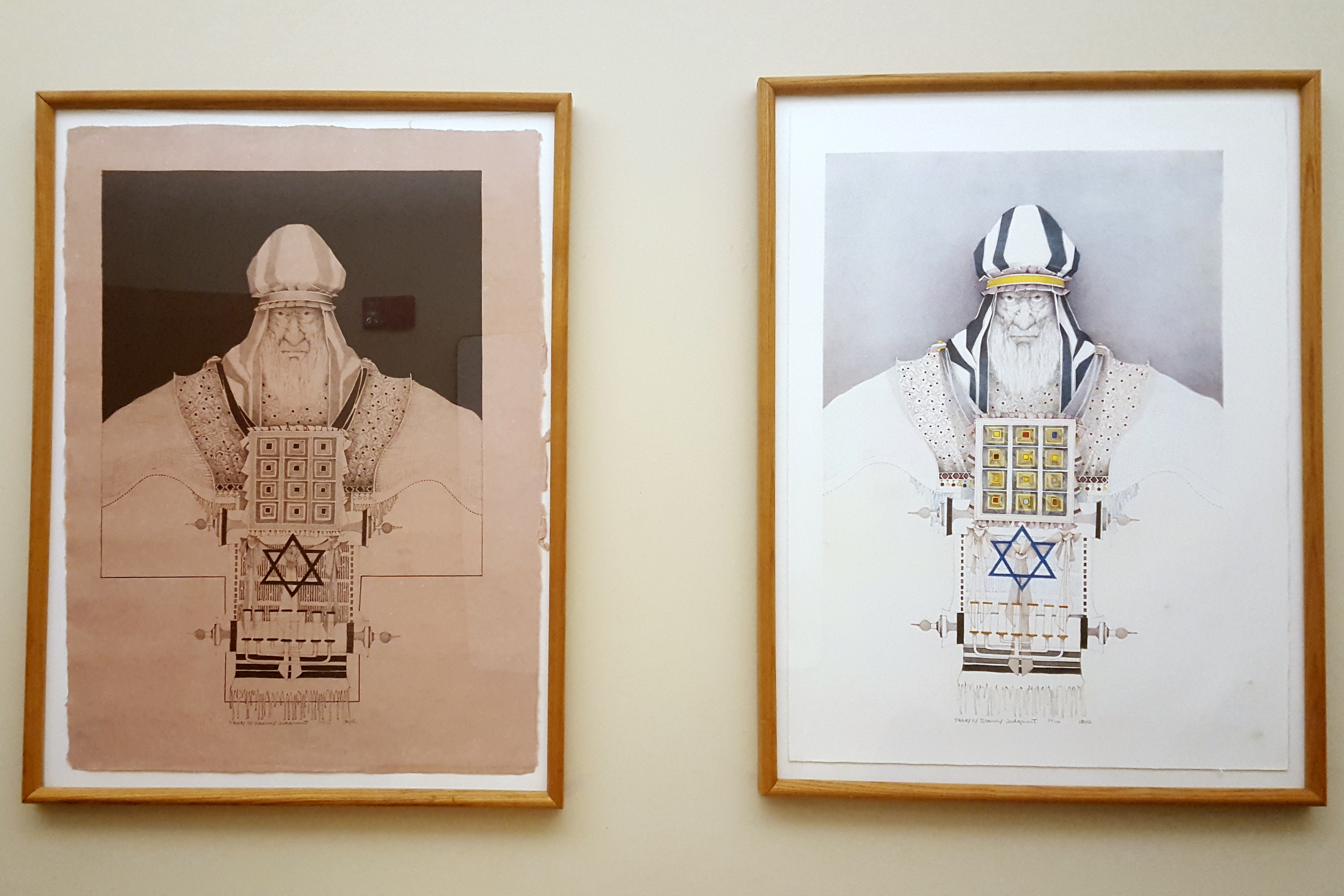 Equity is a system of jurisprudence which serves to supplement and remedy the limitations and the inflexibility of common law. The roots of which, rest in Anglo-Saxon customary law and religious teachings. Because of the strength of the Christian Church prior to the 13th century, the equity court was usually presided over by an ecclesiastic, whose title became the Chief Justice fo the Court of Equity. The principal figure in the image bears this title and wears an ermine-lined robe of scarlet, the color of royal English authority. Indicative of his position, his undercap (coif) was the forerunner of the wigs worn by officers of the court in contemporary England.

Anglo-Saxon tradition is represented by the twelve coats of arms of the pre-conquest kings which form the lower border of the image. These twelve shields also symbolize the jury system which was instituted by Henry II.

The two juxtapositioned figures symbolize the two paths within English Law. The faceless, anonymous, and impartial magistrate of royal authority revealed the law as it existed. A barrister, dressed in the livery of the shire, symbolizes the appeals system of redress and his readiness to pursue that which is fair. 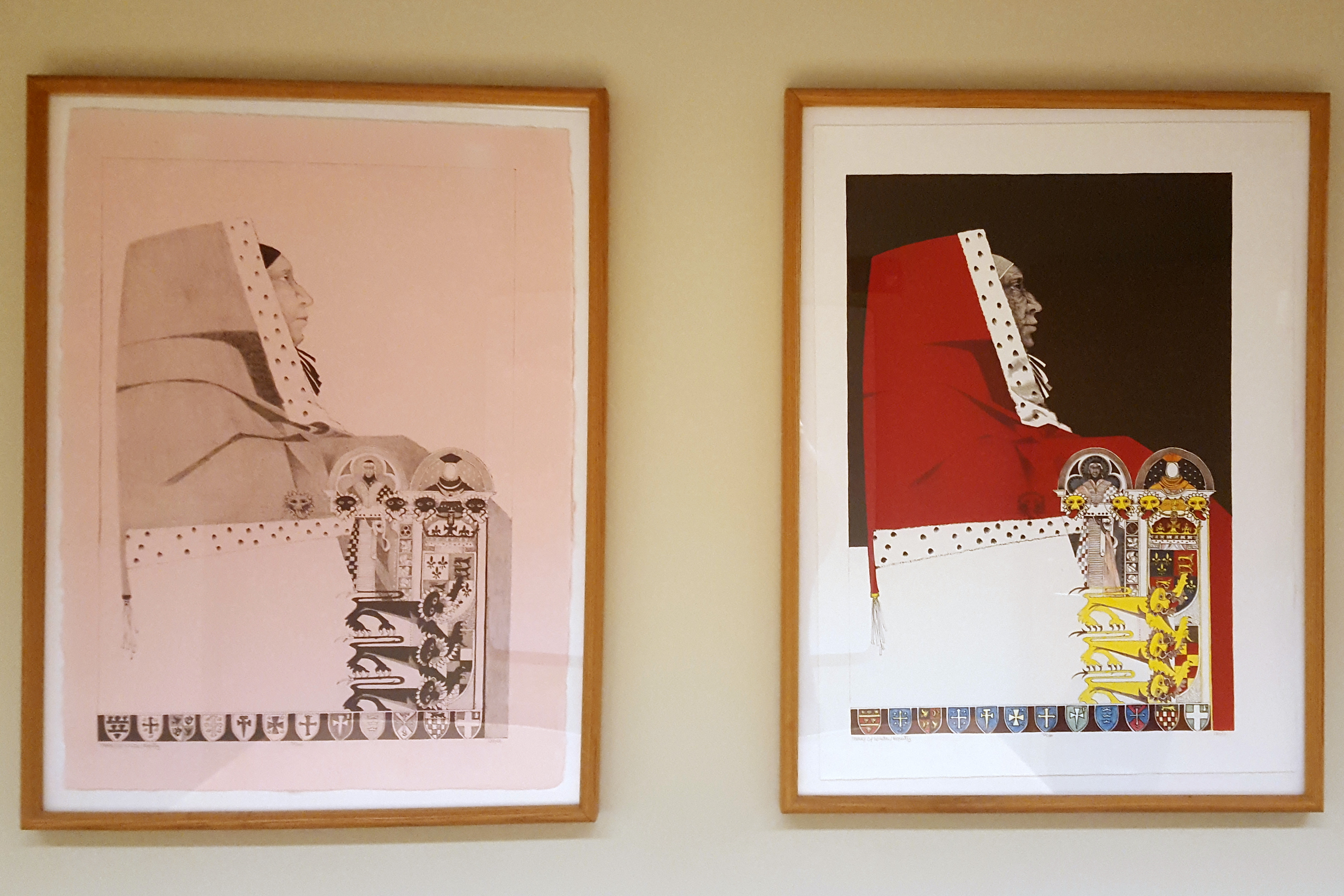 The figure in "Authority" depicts the dominant Yoruba king, the Alafin of Oyo, portrayed wearing a veiled crown of coral beads and sixteen golden birds. Mythology has it that Yorubaland began with sixteen kingdoms headed by the sixteen sons of Odudua, the dual creator being. Each kingdom had a secret Ogboni society which was the highest tribunal under Alafin. Working under a system of checks and balances, the Ogboni society was much like our supreme court. It became the most respected and impartial of the courts, but also, the most feared. The group met every sixteen days and was summoned to council by the ritual drum which was a symbol of authority.

The figure on the ritual drum represents a 14th century legend of a king who suffered paralysis. His legs ultimately turned into mudfish. In the image, the mudfish is seen as the symbol of Olokun, god of the sea and the owner of heaven.

When judgements were pronounced, the Alafin wore the ram's head breastplate, a powerful symbol of leadership and masculinity. His veil was thought to shield him from the vulgar gaze of his subjects when pronouncing judgement. 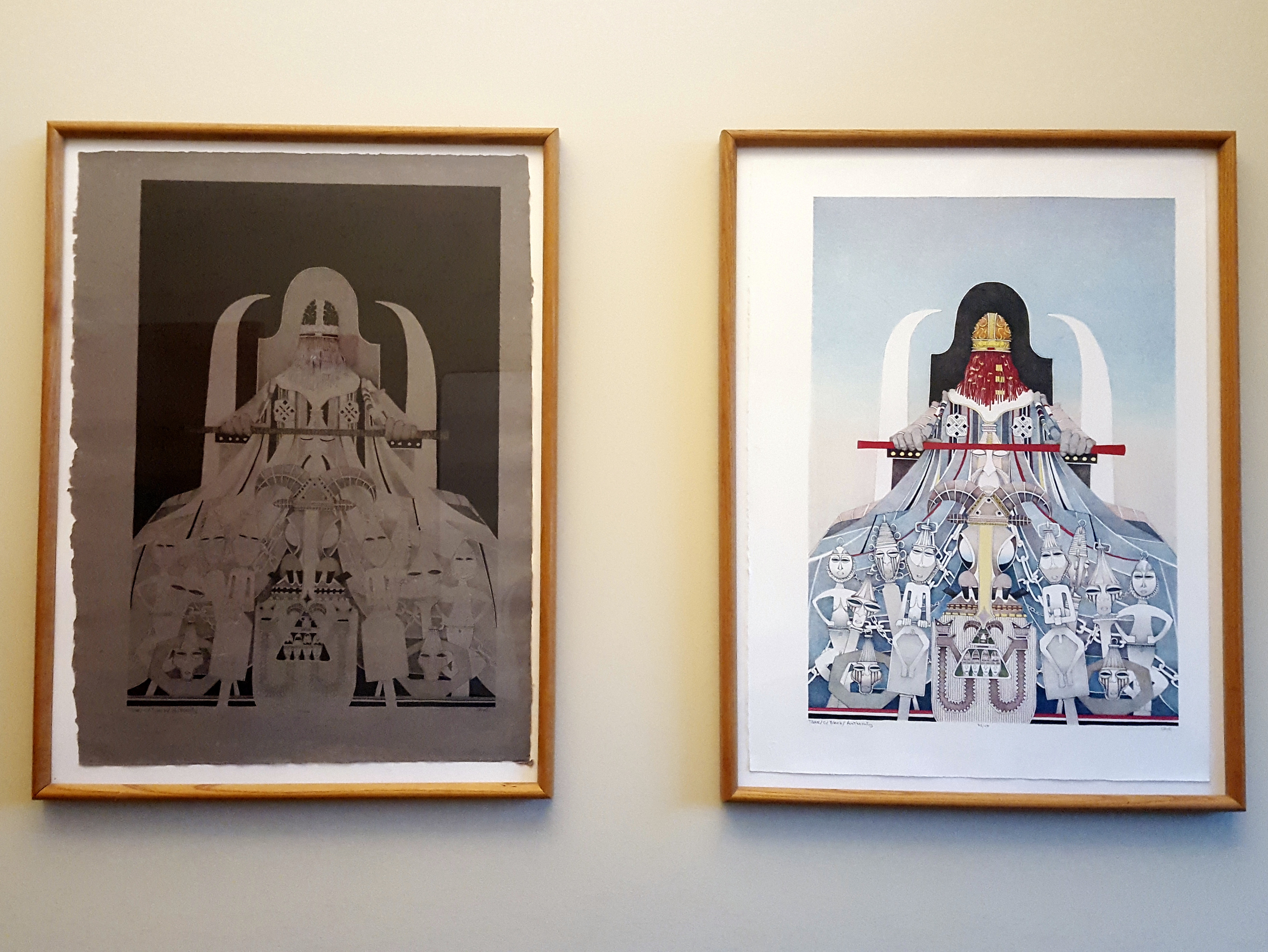 St. Ives of Brittany, the principal figure in the image, was a 13th century lawyer who practiced cannon and civil law in Orleans, France. Known as an ascetic and deeply admired by his legal contemporaries, he spent his time defending the poor and down-trodden, requiring no gratuities for his services. The patron saint of lawyers, St. Ives performed his altruistic services with fluid competency.

It was the combination of influences from Roman law, Christianity and Germanic-Frankish legal philosophy which shaped European Civil Law. This amalgamation was executed and articulated by medieval scholars as opposed to magistrates or justices.

The Germanic-Frankis, Christian and Roman influences are symbolized in the image through depiction of the lily, the cross, and the word, LEX. The lily, or fleur de lis, was first used as a symbol of French royalty by Clovis, sho, through a vision of the trinity, established it as his coat of arms. This symbol was also associated with purity and the purity of knowledge. The word LEX (law) was written in the language of Rome. Depicted in the border pattern, the cross was the principal symbol of the Christian Church, recalling the crucifixion of Christ and the redeeming quality of his death. 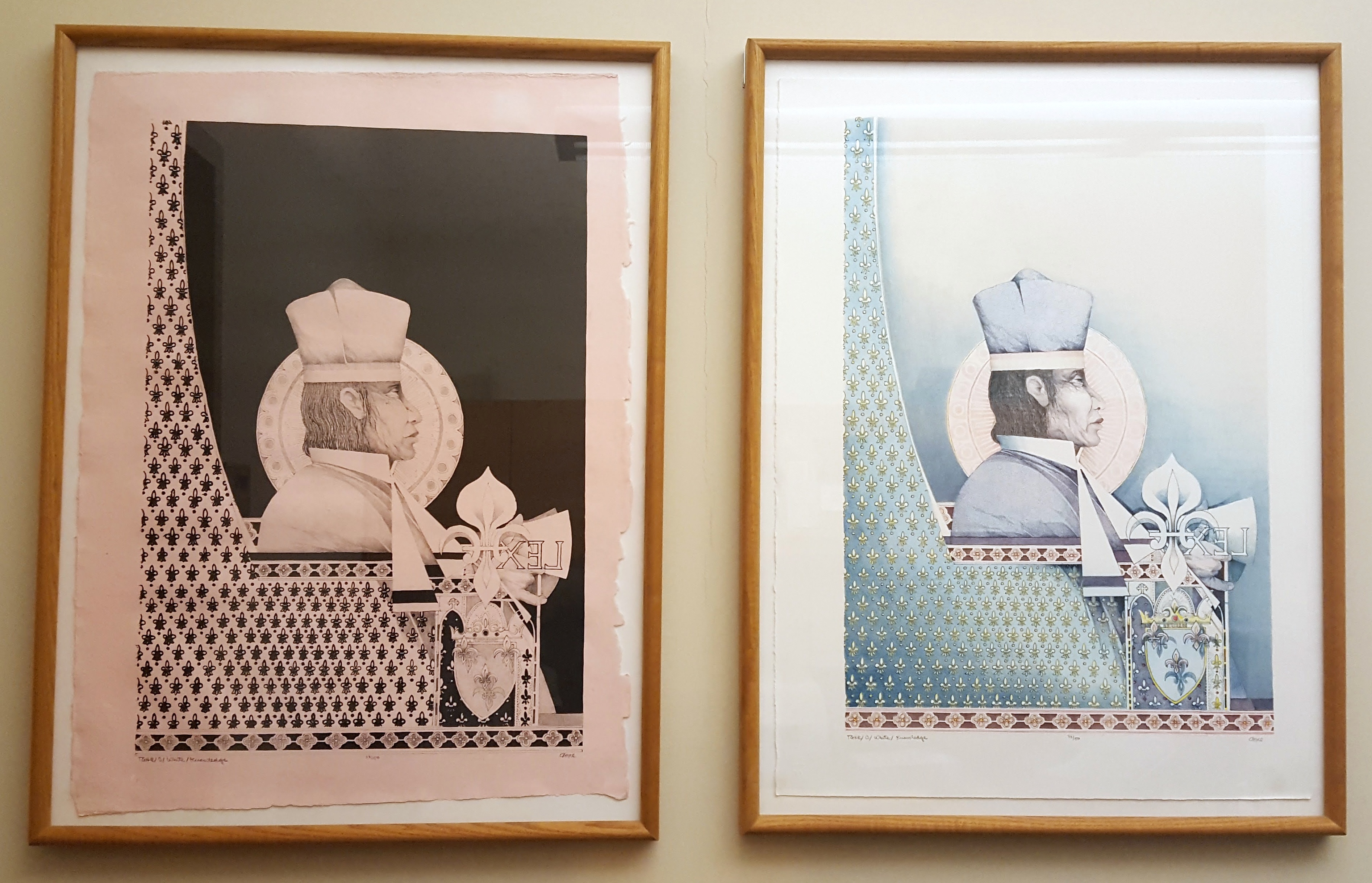 British newspapers from the Edwardian and Victorian eras are full of scandalous trials, giving the defendants and lawyers involved a certain celebrity status. Like modern tabloids, the newspaper reports captivated the public’s imagination through stories of intrigue, love, violence, and especially murder. The magazine Vanity Fair, which is still in print today, often published caricatures of well-known barristers and judges in their “Men of the Day” series, and likewise this period was instrumental to the development of our modern political cartoons and caricatures. Study Room 306 houses several pieces from this period, including two illustrations from Vanity Fair’s “Men of the Day Series” (The Tichborne Case, 1873; The Claimants Council, 1873), three caricatures by Edmond Xavier Kapp, and two prints of engravings by T. Woolnoth.

There are caricature portraits of two judges in traditional wigs: The Claimants Council (1873) and The Tichborne Case (1873), which come from vintage editions of Vanity Fair, as part of their “Men of the Day” series.

Vanity Fair's "Men of the Day" series
The Claimants Council
1873 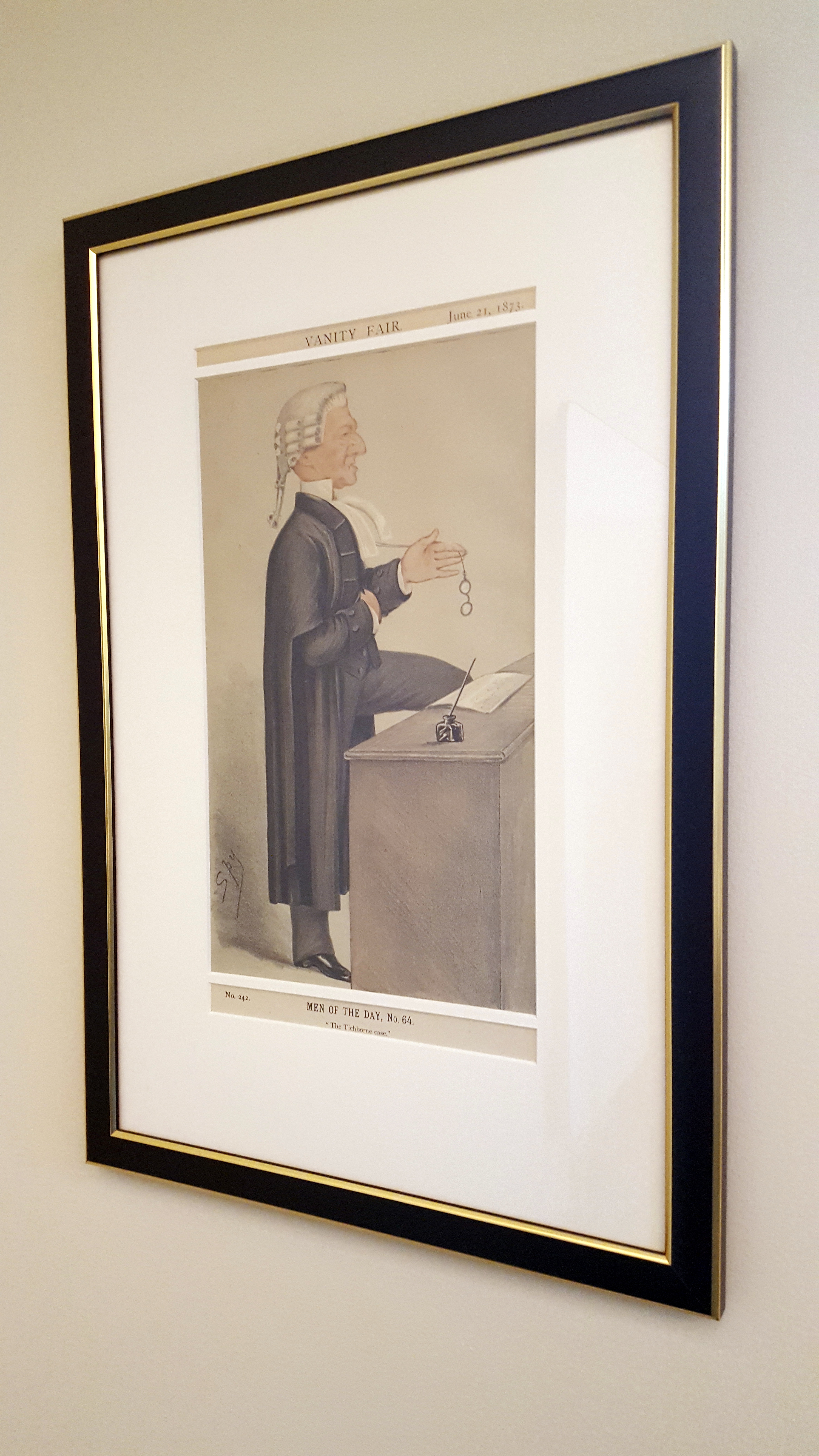 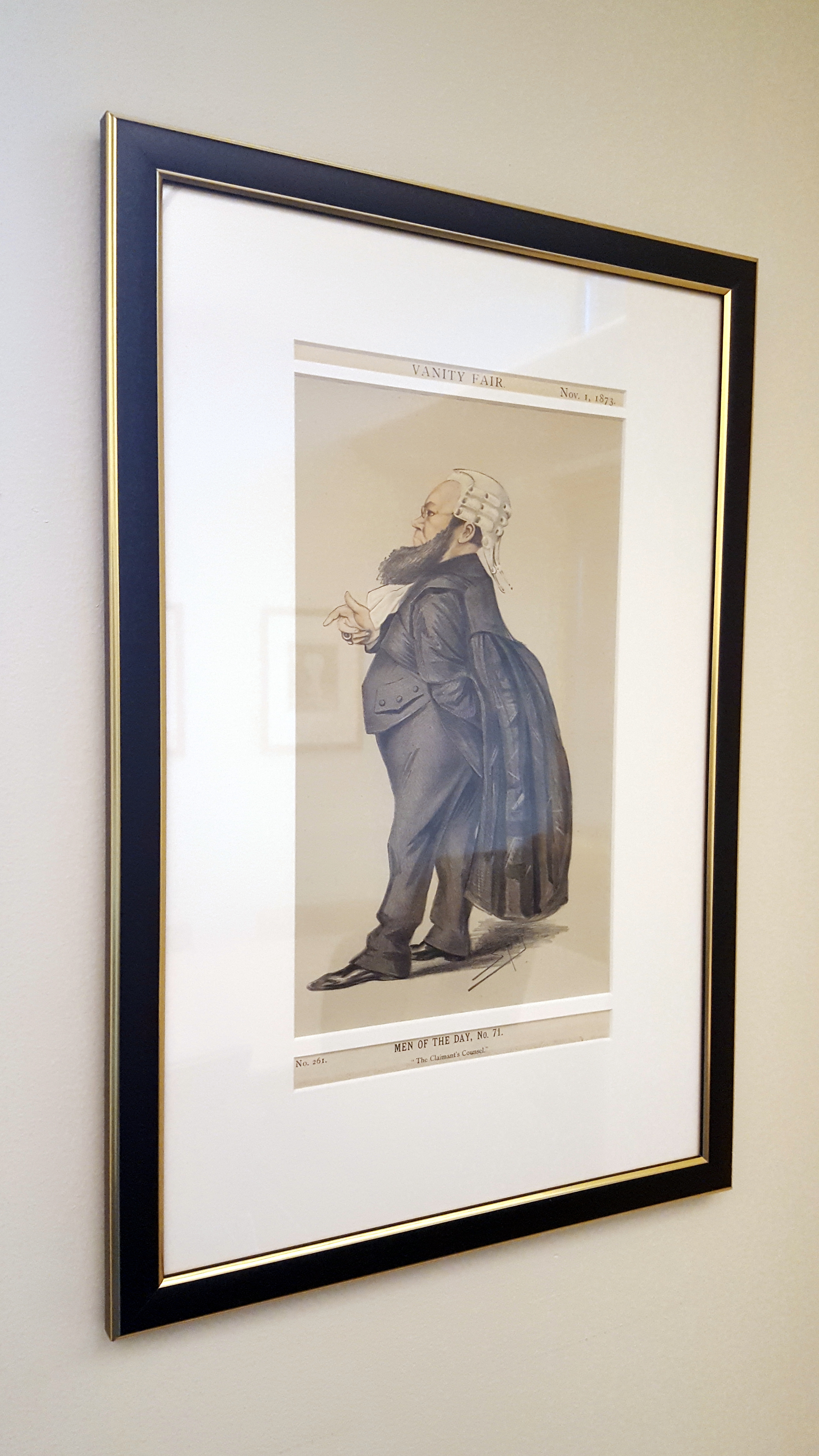 Edmond Xavier Kapp, a London-born artist who served as an official war artist for the United Kingdom from 1940-41, produced many portraits during his lifetime. 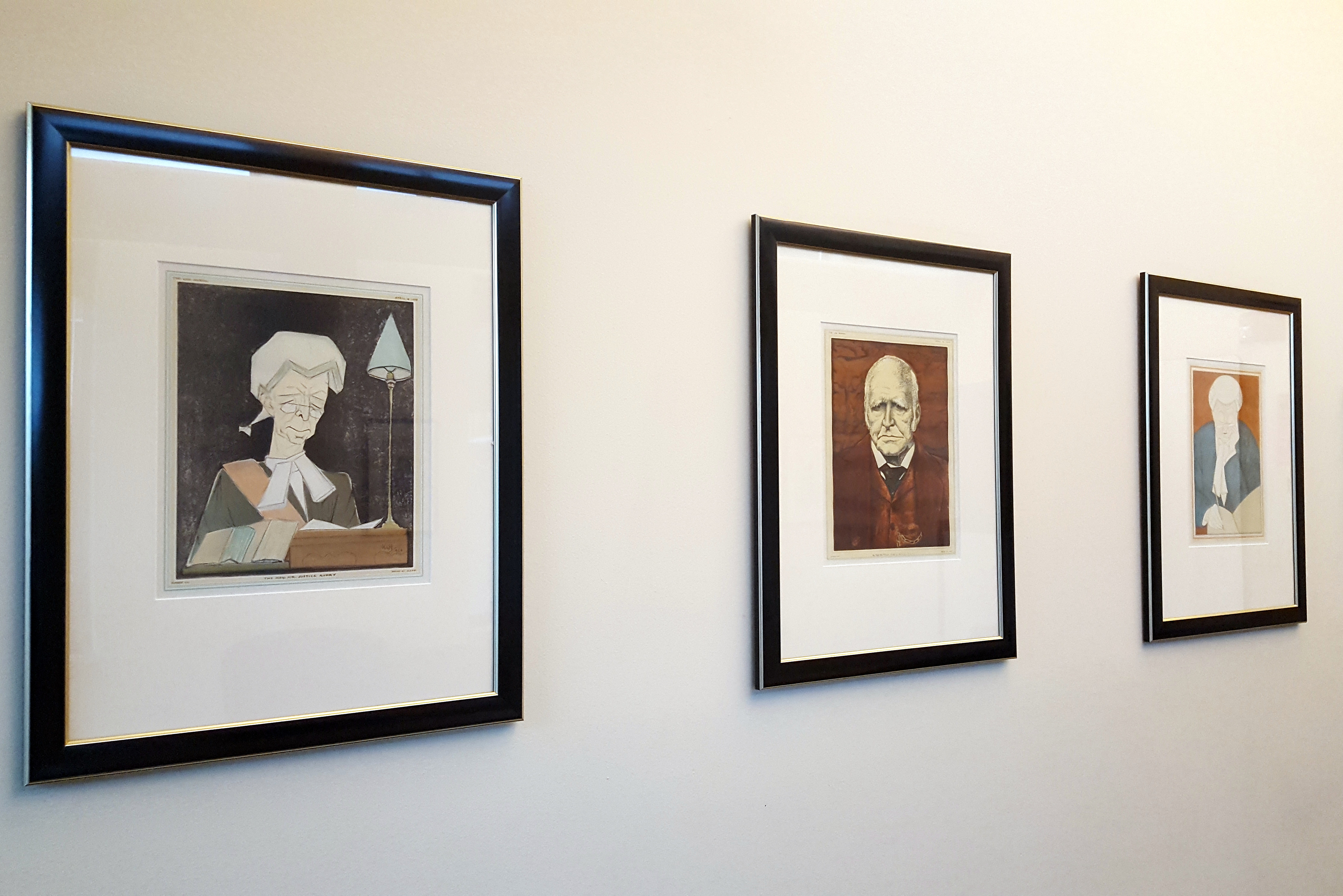 Born in 1875, T. Woolnoth was an expert English artist and engraver. He completed many portraits over his life time, two of which are showcased here, as well as contributing sketches and engravings of flora and fauna to illustrate books and articles. 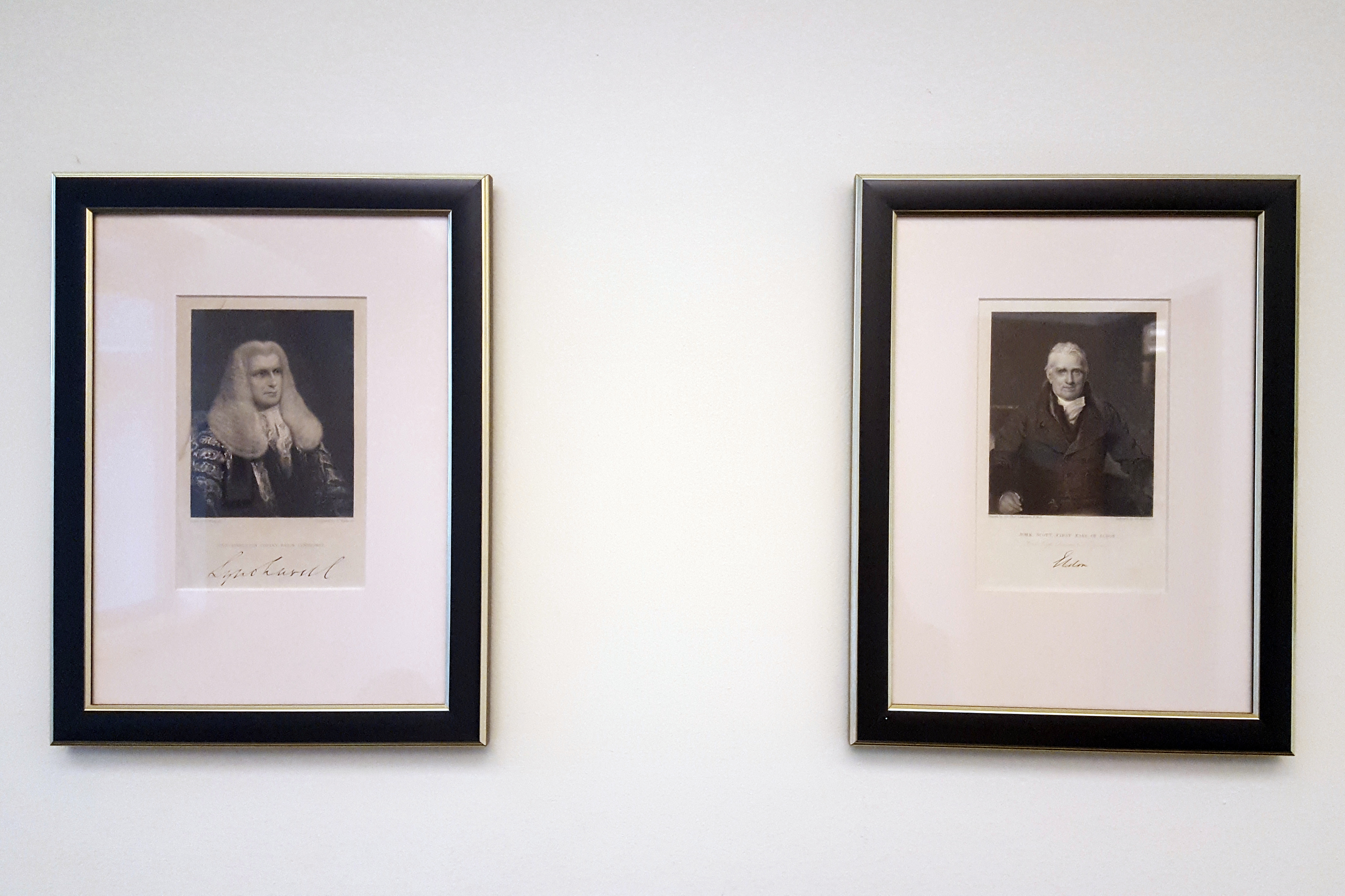 The portrait of Judge Burke is a gift from Michel and Bobbie Stern and has been made to Seattle University School of Law in special memory of Gustav Stern, Michel's father, who taught at Seattle College and was in charge of its musical programs in the late 1940's and early 1950's, and Herbert M. Meltzer, the father of Bobbie, the previous owner of the portrait, who was one of the early "pioneers" in the redevelopment of the Pioneer Square District in Seattle. 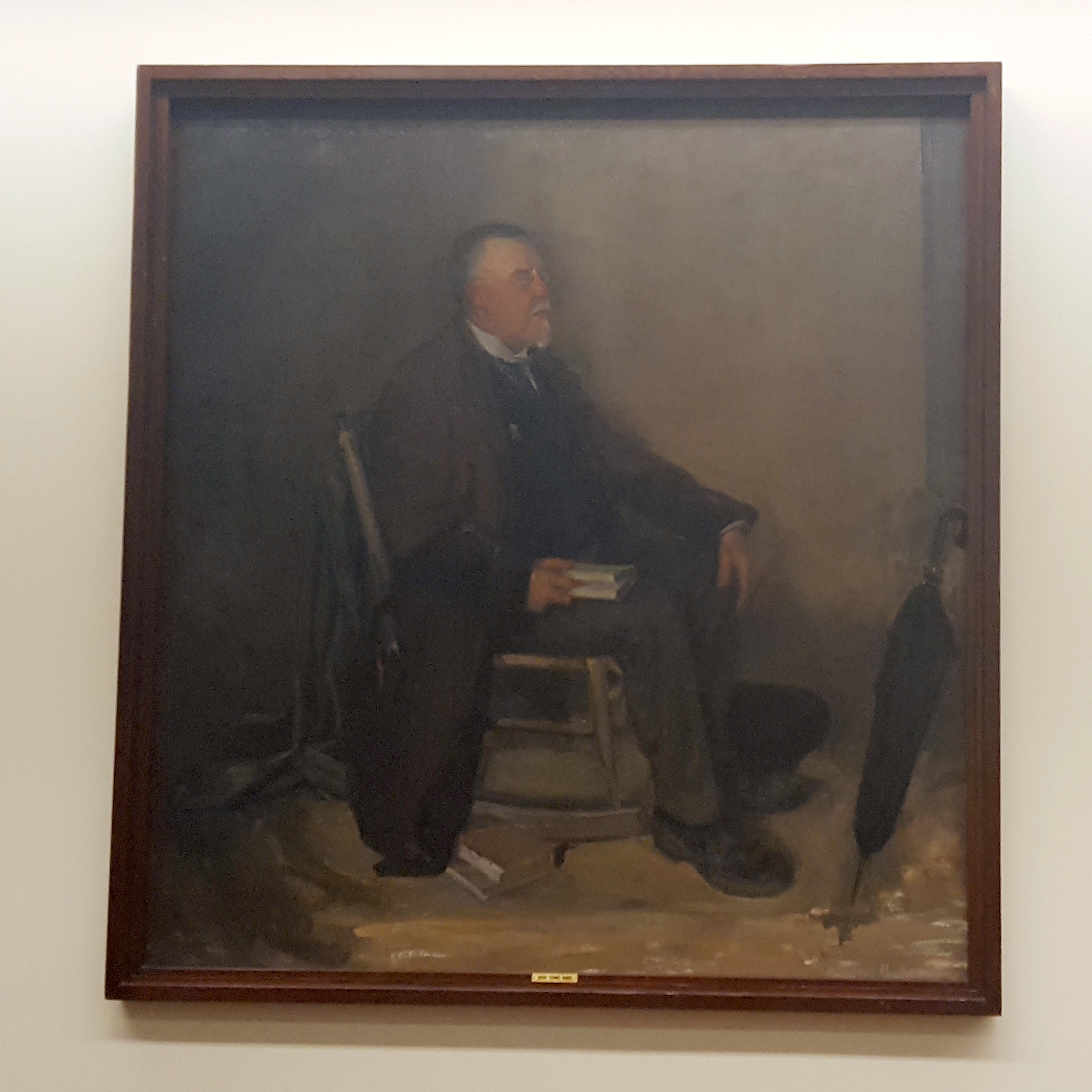 This portrait of Judge Thomas Burke (1849-1925) was painted by Alonzo Victor Lewis (1886-1946). Born in Utah, Mr. Lewis was 15 when he ground colors for Charles Russell in Montana. With his encouragement, he attended and graduated from the Art Institute of Chicago. He moved to Seattle and developed a reputation primarily as a sculptor, but also as an excellent painter. He taught sculpture at the University of Washington and was named Washington Sculptor Laureate by the State Legislature. He created a furor in the art world when his oil painting of Jack Dempsey was hung amid landscapes at the Kansas City Art Institute. Among his best known works are the initially controversial "The Doughboy" and "Victory Memorial" at the State Capital grounds in Olympia.

Judge Burke came to Seattle in 1875 at the age of 25. He practiced law and, within a couple of years, was elected probate judge. He was a civic activist, becoming involved in education, railroading, and the cultural growth of the city. He was an eloquent speaker and a voice for racial tolerance during the anti-Chinese riots in February 1886. President Cleveland appointed him as Chief Justice of the Territorial Supreme Court in December 1888 and he served until March 1889, when Washington was admitted to the Union. The Burke-Gilman Trail and the Burke Museum have been named to honor his accomplishments. 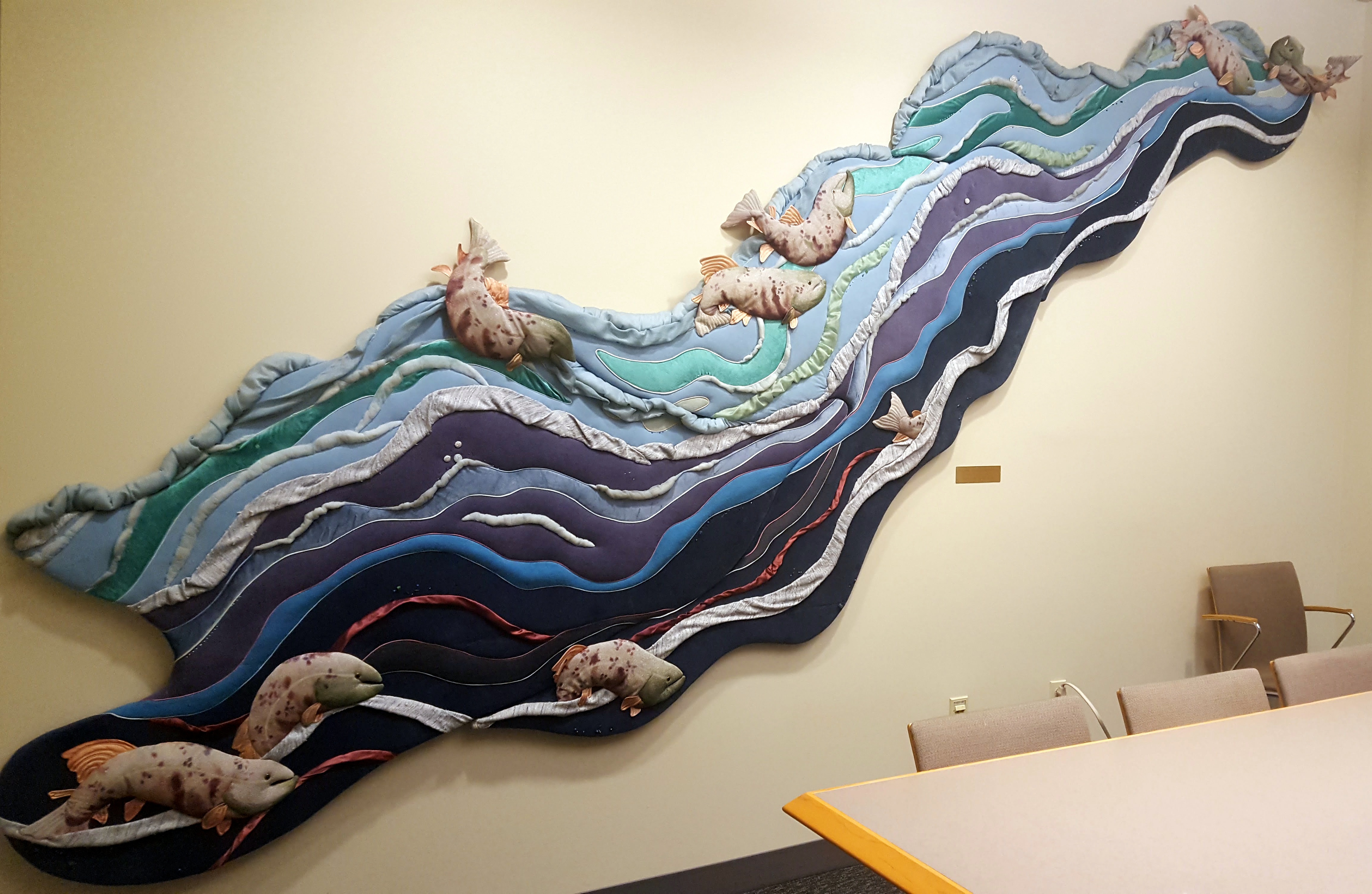 Two That Got Away
Lynn DiNino
1981 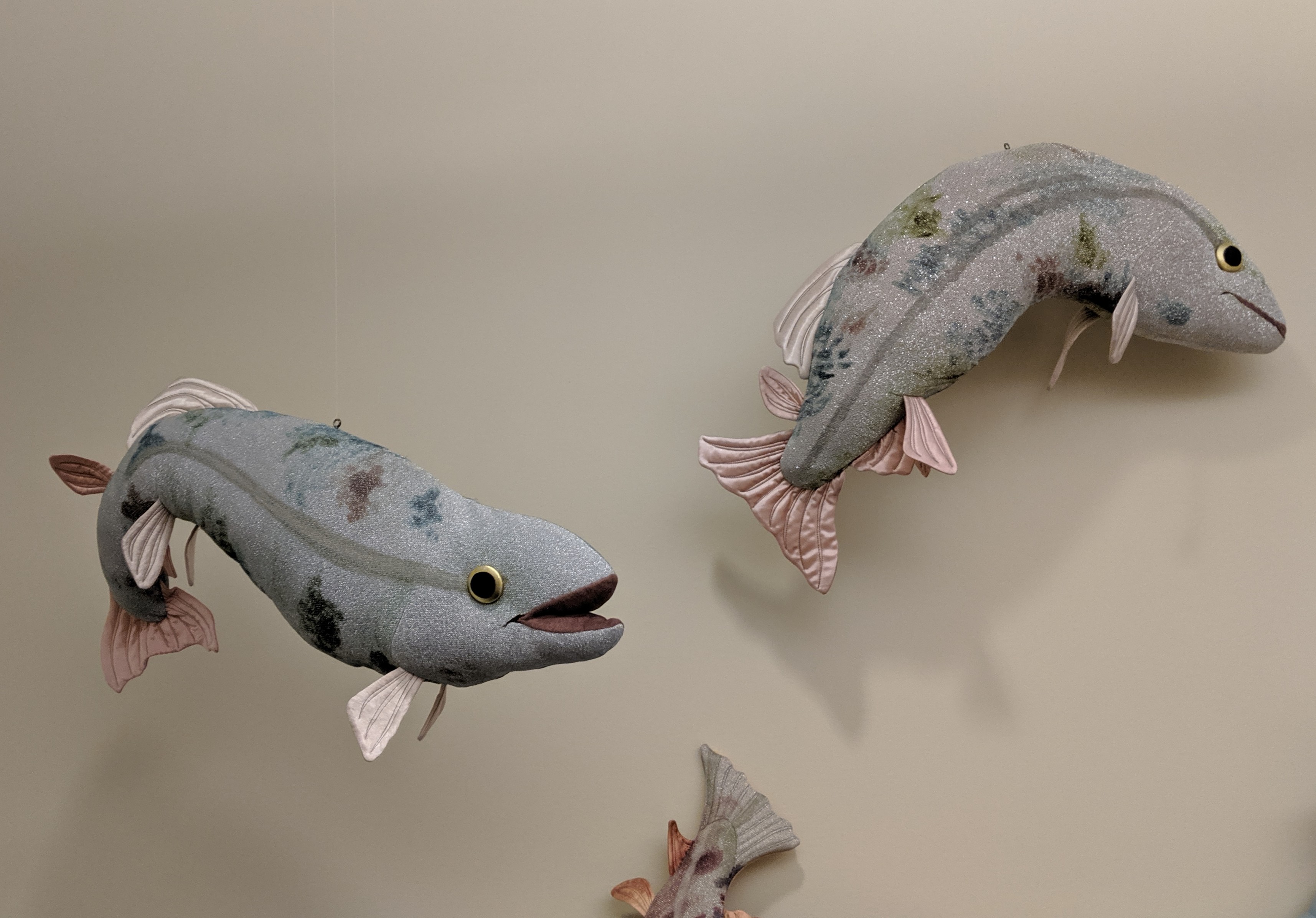 Tucked away in the administrative offices of the library is a large piece by local Tacoma artist Lynn DiNino. Made of various fabrics depicting a common Northwest scene—the yearly struggle of salmon making their way upstream—Di Nino, a self-taught artist who utilizes many different mediums in her works. She enjoys sculpting animals because she says they “can be so easily personified, are silly at times, have curves, and come in such a variety of packages – I am constantly, and permanently inspired.” DiNino was a member of the Washington State Arts Educators Delegations to the People’s Republic of China and has participated in an artist exchange program in Russia.