The first Labor Day was celebrated on Tuesday, September 5, 1882 in New York City.  Two years, later, the holiday was changed to the first Monday in September.  While it is unclear who first suggested Labor Day (some sources say it was a carpenter, others a machinist), it is clear that the holiday was supported by labor organizations.

Cities were the first to officially recognize this “workingman’s” holiday and the states soon followed.  Oregon was the first state to make Labor Day a legal observance in 1887. By 1894, Congress followed suit.

The original proposals for the holiday called for a huge parade and a festival for working men and their families. “It is appropriate, therefore, that the nation pays tribute on Labor Day to the creator of so much of the nation's strength, freedom, and leadership — the American worker.”

September 13, 1990 is when it all started--one hour, two “separate but equally important groups,” detectives, prosecutors, New York City crime, stories ripped from the headlines, and that sound.  Is it a Donk Donk?  A Clang Clang?  Where did they get that sound?  And what are we going to do after so many years of knowing that we could spend at least one hour of our week (okay, by the end, almost every hour of our week if you include cable) engrossed in a perplexing criminal investigation and prosecution, trying to pretend it was somehow school-related?

If your interest in Law & Order extends into the academic, or if you are considering a career in criminal defense law, check out Elayne Rapping’s Law and Justice as Seen on TV.  A professor  of both women’s and media studies, Rapping turned her analytical mind to the law on television when her son became a public defender and she wanted to figure out why there was so much negative reaction to his career choice.   She dedicates the book to all the public defenders who never appear on television, but still toil daily “in the Sisyphean effort to make our government live up to the democratic rhetoric of its own Constitution.”

17 - Final Draft of the Constitution Sent to Congress 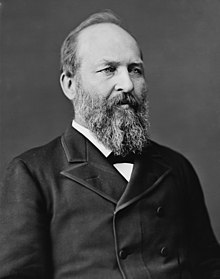 President James A. Garfield died on September 19, 1881, after serving less than half a year in office. President Garfield died at a New Jersey seaside location, where he was recovering from two bullet wounds he suffered on July 2, 1881. Garfield’s assassin was Charles Guiteau, an attorney, theologian, and rebuffed office seeker. Guiteau insisted that he was God’s messenger. He also argued that medical malpractice was the actual cause of death because the doctors’ treatments had caused the blood poisoning that eventually killed Garfield. Guiteau’s attorney (who was also his brother-in-law) argued the insanity defense. In the end, the Guiteau jury, deliberating for just over an hour, didn’t buy Guiteau’s defenses and he was hanged on June 30, 1882. Garfield’s spine, which shows the hole created by the bullet, is kept as a historical artifact by the National Museum of Health and Medicine in Washington, D.C. Guiteau’s autopsy did show evidence of syphilitic paresis as well as chronic degeneration, leading some doctors to change their opinion of his mental state.

30 - Women Get the Vote in Wyoming

On September 30, 1889, the Wyoming legislature approved its state constitution with a provision giving women the right to vote (Wyoming was admitted to the union in 1890). Before becoming a state, Wyoming had been the first territory to give women the right to vote in 1869, followed by the Utah Territory in 1870 and the Washington Territory in 1883 (Washington’s Supreme Court later found that legislation unconstitutional). Washington’s Territorial Legislature had actually introduced the first women’s suffrage bill in 1848, but that bill was narrowly defeated.

While most of the activism for women’s suffrage was on the east coast, the western states were far more responsive to passing laws to enfranchise women. By 1914, most of the western states had given women voting rights while Kansas was the only state east of the Rockies to do so. In 1920, the Nineteenth Amendment was ratified, giving all female American citizens the right to vote.